It’s officially fall, the leaves are falling but the heat is still on in California.Speaking of heat, and gossip .
I’ve been hearing more and more about the developing story regarding Ray J and the Kardashians.
Basketball, season is just around the corner and the Boston Celtics are dealing with a major scandal.
Is it a rumor or truth that Rihanna will be performing at the Super Bowl ? That should be entertaining at the least.
R.I.P Coolio, you will be missed.
I’m excited to have talented ,hair stylist, and beauty consultant Korey Fitzgerald on the cover for September. You will be seeing and hearing a lot from this young man in the not too distant future.
On the indie music scene, iconic bass player Mitchell Coleman Jr is featuring the legendary Freda Payne on a new single from his forthcoming album ,”Dedication”,a tribute to his late mother .French/ American artist Aneessa is in the studio polishing up songs for her debut album this fall. sneak previews are in the works. Also her hubby , Motown legendary producer Michael B. Sutton is gearing up for his new single release called “ Sexual” . Stay tuned.
Be on the lookout for smooth jazz artist Yulia , who’s track Keep the Faith keeps climbing the charts and hot new country artist Angela Easley is moving fast on country’s Music Row chart with her single “Don’t Let The Devil Down”.
And don’t forget to flip through our pages of fashion , fitness, beauty, and more in this issue.

Greeting everyone,It’s officially fall, the leaves are falling but the heat is still on in California.Speaking of heat, and gossip .I’ve been hearing more and more about the developing story regarding Ray J and the Kardashians.Basketball,season is just around the corner and the Boston Celtics are dealing with a major scandal.Is it a rumor or truth that Rihanna will be performing at the Super Bowl ? That should be entertaining at the…

Tune in to WWW.KPIURADIO.COM, Pump It Up Magazines’ flagship radio station , playing indie and mainstream music from the best of the best. Hip Hop to Jazz, there is ear candy for the masses.
Anissa Sutton
– 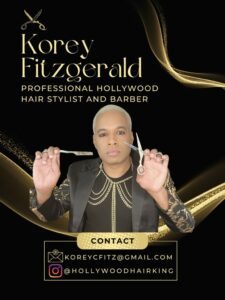 Residing in the prestigious Southern California city of LA, Korey (@Hollywoodhairking). has become widely known in the hairstyling industry, offering a diversity of services, including; cuts for men and women, beard grooming (no razor), color, all methods of hair enhancements, updo, flat irons, wand curls, traditional curling styles, eyebrow waxing and so much more. His work has been recognized by major industry stars and he has been invited to lucrative events, networked and met successful stars who have supported his craft.

Professional and charming would be the best way to describe Korey Fitzgerald.

Originally from Indianapolis, Indiana, Korey Fitzgerald (@Hollywoodhairking). has always been captivated by the art surrounding hairstyling. As a kid, he used to play with his sister’s dolls’ hair and get in trouble for always changing their look. Later on, he went on to graduate from the school of Cosmetology in 2003, took a one-on-one class about fusion hair extensions in Atlantic City (2004), participated in the L’Oréal color classes in Boston, and recently participated in the hair extension technique class with Yourhairshop which took place during the pandemic. His vast CV wanders on and on with more achievements.

At the age of 20, Korey moved to New York City where he lived and worked as a hairstylist for at least nine years. Through this time, he worked with several notable stars like D. Woods of Danity Kane from the dance scene before the singing group and also gave haircuts to several key choreographers and dancers of Beyoncé. Still reigning in New York, Korey was able to make a lot of contacts from working through the celebrity nightlife of the city and this taught him a lot about style, hair, makeup, and clothing. His taste evolved in a multifaceted way.

After a career blasting time in New York City, Korey Fitzgerald moved to a couple of cities, including; Massachusetts and Rhode Island, just before choosing to settle in LA. During his time in Rhode Island, the prodigy styled hair on Claudia Jordon (RHOA star) and also taught dance to students from elementary to high school.

Since relocating to LA (2016), Korey has worked for several salons, mobile hair apps, and independently pushed his career in a straightforward direction. His most memorable moments always happen when he gets a chance to turn his clients’ frowns into a smile.

In addition to Korey’s successes in the hair industry, the gifted stylist also doubles as an artist and choreographer and has been featured in several projects over the years.

I styled hair and cut hair for several key choreographers and dancers of Beyoncé I got to make a lot of contacts from working celebrity nightlife in NY. Dancing for some of Rupaul’s Drag Race drag queens and hanging with club kids. It all taught me a lot about all around style. Hair, makeup, clothing…just how to have good taste all around and use discernment on looks, feels and tastes!

5 November 2020 Pump It Up Magazine Entertainment, NEWS, On The Cover 0

Dear Readers, As the last days of fall are upon us, we have a lot to share with you in this issue . But the bulk of this issue is our focus on new wonderful […]

2 August 2020 Pump It Up Magazine african american, NEWS, On The Cover 0

Hello Readers, I hope all are safe and well during these challenging times we are living in. This issue pays tribute to the magic of soul music! First let us pay our respects to Civil […]

31 August 2022 Pump It Up Magazine Entertainment, NEWS, On The Cover 0