(June 12, 2019 – Los Angeles) Pump It Up magazine is a bimonthly entertainment industry publication and web domain geared toward independent artists around the world in two distinctly impactful ways. First, the company is a dedicated to showcasing and introducing exciting and worthy new singers, musicians, songwriters and producers to the public and each other. Second, it is also a vital resource of information, advice, contacts and connections that can assist hard working independent artists in learning all of the behind the scenes and forefront aspects of the business. This arms them with the tools to most wisely map out the trajectory of their climb to success. On top of all that, Pump It Up dedicates a full page to Humanitarian Awareness in every edition.

Pump It Up magazine is the brainchild of Anissa, a multi-faceted creative and businesswoman who has previously collaborated on the start-up papers Delit Music Magazine in Paris and The Umbrella Music Magazine in America. Those experiences thoroughly prepared her for the day she decided to start her own publication, Pump It Up, combining her gifts for scintillating and uplifting editorial with her personal experiences as an entertainer/recording artist under the stage names Anya Rose, Lady Aneessa and, currently, simply Aneessa. As one who not only sings and writes songs but engineers, mixes, masters, creates marketing plans and started her own record label, Editions L.A. and Editions L.A. Design, to do so, Anissa is the perfect renaissance woman to usher new artists into the full spectrum of what it means to be seriously competitive in today’s ever changing music industry, but to also have BIG FUN doing it. Thus, the encouraging and inspiring name Pump It Up – an expression that says “Viva Life” and “Where’s the Party?!”

“I want to give a platform and advice to indie artists,” Anissa states. “I know what they go through. It’s so hard to get people to listen to what you create…to support it, share it and help you succeed. Many artists only think about being an artist – singing, writing songs and performing – but they must know the business. People take advantage of you if you don’t. I am a firm believer that artists must work hard by doing their part to learn all of the elements that do on behind the scenes. Their private lives may be a catastrophe in the short term but in the long run, the most important thing is to keep on learning, keep on growing and keep on going.”

Pump It Up was started in 2016 as a monthly magazine available digitally on line and in print on demand. In three years-time, Pump It Up has grown to 20,000 website subscribers for the now bimonthly magazine, plus has expanded online at pumpitupmagazine.com to include a digital radio station programming 24 hours a day of exciting new music and artists, dayparted into genres ranging from French, Deep House and EDM to Pop-Dance, Jazz, R&B and Blues.

Among the new artists Anissa has been most passionate about championing are R&B singer Saint James (who she pegs as the next scandal-free R. Kelly), Aya Ben (a jazzy soul singer from France who’s been on the scene for ears but has yet to record an album) and teenage singing/songwriting sensation Randy White.

Assisting Anissa in all of her music decisions and negotiations is her soulmate Michael B. Sutton, a music producer/songwriter, a recording artist in his own right and the CEO of Sound of LA Records. Michael was also instrumental in bringing aboard his cousin, Carol Mongo – former Director of Parson’s Institute of Design Paris – as Fashion Editor and Consultant.

For anyone seeking a supportive platform for independent artists of all stripes to stay up to date on the latest industry developments that can make the difference between just getting by and going all the way, tap into Pump It Up – today!

Pump it up Magazine is Now available to more than tens of thousands of retailers, libraries, schools, e-commerce companies, and other channel partners, including Amazon, Barnes & Noble, Chapters/Indigo (Canada), and other well-known book retailers and wholesalers across North America, and Europe 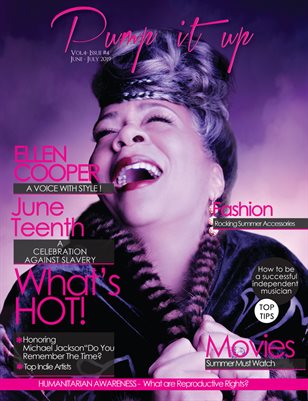 Greetings everyone, Wow! What a ride we’ve had with the Spring weather in California. Rainy, cold and cloudy for many days. It finally looks like the sun is back and pointing us toward summer and our June edition. This month we’re proud and happy to say that our new cover girl this…