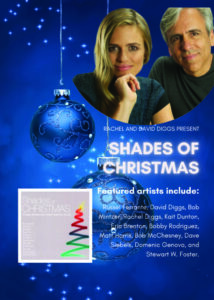 A soulful blend of jazz and R&B creates the distinctive blue-eyed soul sound of California-based keyboardist, composer, and arranger David Diggs. Named one of three best new artists by Cash Box and Billboard in 1985, when his fourth solo album, Streetshadows, spent 26 weeks in the Top Ten of Billboard’s jazz charts, Diggs has continued to make his presence felt as a producer/arranger. His resumé includes producing, arranging strings and horns, and playing on recordings by Quincy Jones, Irene Cara, Jonathan Butler, Richie Furay, the Brothers Johnson, and Pat and Debby Boone. He has produced three Grammy-nominated albums: Bob Bailey‘s I’m Walking, Barry McGuire, and the music for comedian Jonathan Winters‘ Finally Captured, Vol.

He has gone from listening to albums by Buffalo Springfield as a teen to producing, arranging, and touring with Richie Furay.

5 Ideas to Promote Your Music During the Holidays

2 December 2020 Pump It Up Magazine Entertainment, NEWS, Top Tips Comments Off on 5 Ideas to Promote Your Music During the Holidays

Here are five tips to promote your music this holiday season. […]

Imagine receiving airplay and earning income from a song year after year and having that same song be recorded by multiple artists over a span of decades. That is what can happen with a holiday-themed […]