By Adam B. Vary

In advance of the launch of the first trailer for “The Matrix Resurrections” on Thursday, Warner Bros. has launched an innovative website featuring an interactive and widely divergent first look at the newest installment in the 22-year-old franchise.

At WhatIsTheMatrix.com, users are greeted with the simple choice first presented in 1999’s “The Matrix”: Click on the blue pill, and stick to the reality you’ve known your whole life; click on the red pill, and signal that you’re ready to see how deep the rabbit hole goes.

In the context of the teaser, each choice presents users with two different angles on what apRelated Stories

Users who click on the blue pill hear a voiceover by Harris’ character saying, “you’ve lost your capacity to discern reality from fiction,” before urging the user to accept that their reality is real, as the current time flashes on the screen and Harris reads it aloud, saying, “anything else is just your mind playing tricks on you.”

By contrast, users who click on the red pill hear Abdul-Mateen’s voice telling them that while they believe it’s the current time — again, with Abdul-Mateen eerily reading the time aloud — “that couldn’t be further from the truth.”

In either case, during both scenarios, a series of quick-cut shots from “Resurrections” flashes on the screen — each time a user clicks on a pill, the footage changes slightly.

Some of the shots include:

Reeves’ Neo swallowing a blue pill while a much older, balder man appears in his reflection.

A shot of Neo’s pill bottle, prescribed to his Matrix alter ego Thomas Anderson. The medication is called “Ontolofloxin,” a clever tweak on the franchise’s exploration of ontology, i.e. the nature of being.

Abdul-Mateen’s character staring at himself in the mirror.

A new character played by Jessica Henwick (“Game of Thrones”), who appears to be another soldier in the fight against the machines.

The character portrayed by Jonathan Groff (“Mindhunter”), who seems to be undergoing the first stages of the interrogation Neo experienced in the first film.

A man who appears to be Neo taking a terrifying step off a very tall building, in what seems to be a test of his reality.

A reprise of one of the first shots from 1999’s “The Matrix” of Trinity (Carrie-Anne Moss) sitting alone at a chair as soldiers move in on her.

Neo walking iconically in a noir-y street, a coffee house called “Simulatte” shining in the background. 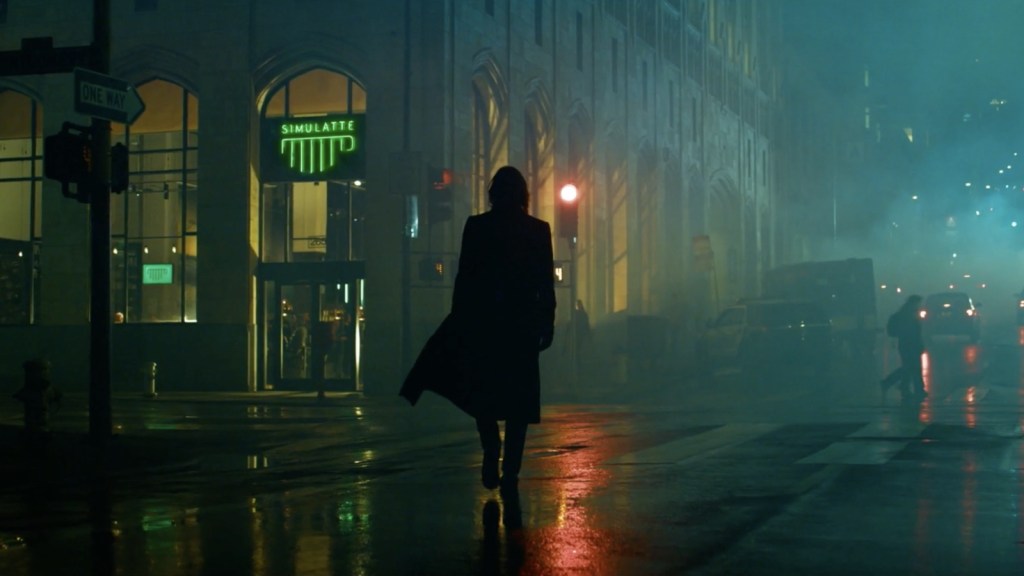