Believe it or not! – Sensitive persons can read your thoughts and feelings because our human thoughts have forms and images.

For professional mind reader and hypnotist, NADER HANNA, reading minds is a unique ability that he possesses and employs each time he meets an audience. His mind-bending performances are considered to be engaging and will leave you in wonder and awe. 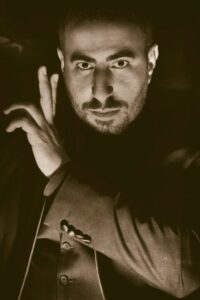 From the age of seven, NADER HANNA developed an interest in magic after his father, an amateur magician from Egypt, showed him a card trick. This fascinated him and set off his interest in the field of magic, the occult sciences, and psychic phenomenon. Over the years, he has practiced and studied the art of mind-reading, together with performing several shows and at corporate events, which have always left his audience with that feeling of mystery and astonishment.

With a good foundation and natural ability to take you on an exhilarating journey into the impossible, NADER HANNA, is the ideal candidate for your next private, public, or corporate event.
If you are in for an experience that will blow your mind, the prodigy is always available to turn your quest into a reality through his art of mind reading and hypnotism. His professionalism and unique skill have already braced audiences at events such as; NBC Universal and has performed for celebrities like; John Landis, Joe Dante, and Tippi Hedren.

Nader most exhilarating feats of mental ability are when he goes on the mental hunt for hidden objects or thought of persons in the audience. For these demonstrations Nader is taken out of the room by a committee from the audience that watch over him to make sure he can neither see or hear what is taking place in the performance area. While Nader is out of the room an audience member selects a person from the room to be identified by Nader when he returns or hides a borrowed object like a ring anywhere in the room. Upon Naders return he can identify the person selected or locate the hidden object by merely allowing a sender to communicate to him the location via mental direction. Nader claims this is do to an extreme sensitivity he has developed over years of reading minds. Sometimes Nader will even add a blindfold while he performers these demonstrations to make it more difficult for him. Nader’s most astonishing demonstration is being able to locate a book thought of by an audience member and open the book to the page the audience member is just merely thinking of. We had to see this demonstration for ourselves and hired Nader for a birthday event, while Nader was taken out of the house a ring was hidden in the house. Nader selected an audience member who knew exactly where the ring was hidden and through mental direction Nader was able to find the ring in a matter of seconds. At first we thought that there would be no way Nader would find the ring do to the challenging hiding spot, but Nader succeeded and astonished all the attendees.