Behind the music, Grammy award-winning entertainer Jon Bon Jovi is on a mission to feed and empower those in need. His strategy is simple: “One soul at a time.”

With his nonprofit Jon Bon Jovi Soul Foundation, based in Philadelphia, the artist is fighting poverty with direct action.
“I thought ‘how can we bring people together in an affordable, accessible way?’ ” he says.
A harsh Northeast winter sharpened his focus on homelessness.
“One night I was in a hotel room looking down on city hall in Philly and I saw a man sleeping on a grate in the dead of winter,” Bon Jovi says.
“Right there it all crystallized for me. It didn’t matter if you were young, old, black or white, Republican or Democrat … this was an issue that could affect anyone.”
According to the nonprofit’s website, the Jon Bon Jovi Soul Foundation has helped provide more than 500 affordable homes to those in need across 10 states.
“Most Americans live two paychecks away from problems, and I thought this is something we can do,” the artist says, “… and most importantly I didn’t need the scientists to find the cure.”
Bon Jovi also founded the JBJ Soul Kitchen, a community restaurant that serves everyone regardless of their ability to pay.
At a glance, it looks like a trendy New Jersey restaurant. There are linen napkins, fresh flowers at each place setting and a farm-to-table menu.
But each meal offers one essential ingredient: hope. 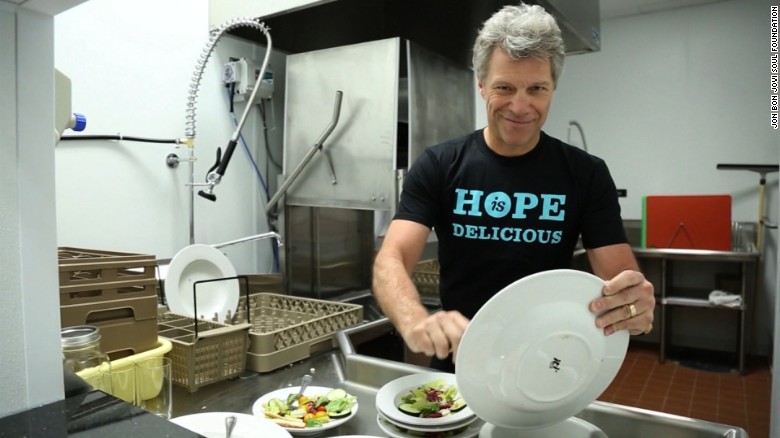 “The key to our success is empowering the individual,” Bon Jovi says.
“We have created what we now call a ‘pay it forward’ model,” Bon Jovi says.
In-need patrons volunteer their time assisting with day-to-day restaurant chores, which pays for their own meal as well as the tab for their family.
Also, paying patrons are requested to buy a “pay it forward” card.
“You not only affect change by paying for your meal, but the one next to you,” Bon Jovi says.
“What this is not is a ‘pay what you can,'” he adds. “In order for the model to work we need participation.”
Whether a patron volunteers their time or “pays it forward,” the service toward each guest is exactly the same.
For restaurant volunteer Moe Keane, it is this principle that makes the JBJ Soul Kitchen one of her preferred ways to give back.
“You don’t know if someone is dining here because they are in need or to donate or pay it forward,” she says. “That’s what’s nice about it. Everyone is treated the same.”
Currently in Red Bank and Toms River, New Jersey, the JBJ Soul Kitchen and Bon Jovi look forward to expanding the successful model.
“Now the question is ‘do we want to open two or three or 10 … or do we go really big?'” he says. “Well, we will definitely see growth. The question is incremental.”
When asked about the secret behind his “pay it forward” success, Bon Jovi has one simple answer.
“The key to our success is empowering the individual.”
About Pump It Up Magazine 1651 Articles
Music | Movie | Fashion | Beauty | Fitness | Wellness | Books | Food | Travel & Events | Real Estates | Humanitarian Awareness Magazine based in Los Angeles California Reach for the stars while standing on earth! Pump It Up Magazine is the L.A. colorful, inspiring and vibrant print and online magazine founded by Anissa Boudjaoui-Sutton, showcasing dynamic up-and-coming talent and top tips from around the globe!
Website Facebook Instagram Twitter YouTube

6 Ways to Find a Charity that You are Passionate About

Charity work is a labor of love and can provide you some of the most rewarding experiences of your life. While the decision to actually dedicate your time to a charity might be a seamless […]

Project Angel Food cooks and delivers over 600,000 nutritious meals each year, free of charge, to the homes of men, women, and children affected by life-threatening illnesses. Our medically tailored meals and nutritional counseling […]