JAN DALEY is a singer and performer whose career has spanned over 5 decades. Jan Daley’s Smooth Jazz album “The Way of A Woman” a collection of classy, elegant and awe-inspiring tones has hit the Top 10 on 2 Billboard Album charts? and is nominated for the Hollywood Music in Media Award, november 2017, Congrats Jan !

The first song I heard her sing was “When Sunny Gets Blue”. She absolutely slayed it! I was hooked,I literally got chill bumps! “Who is this woman I’ve been missing out on?” I was so moved by her gorgeous vocal texture & her elegance, I had to share it with you !

Hello Jan ! What inspired you to become a singer ?

I saw Judy Garland sing “Somewhere Over The Rainbow,” in Wizard of Oz, and my mom told me I said, “That’s what I want to do, when I grow up, mommy” 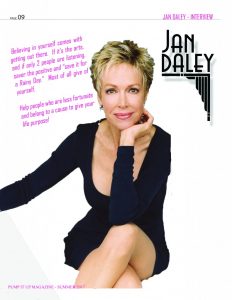 What’s your favorite song on the new album? Why?

That’s a hard one.  The Way of a Woman, I think it is an anthem for woman and what guys put us through, but it also speaks about trust and promises that everyone has going into a relationship and what happens when they are broken. “She Was a Dreamer” I wrote for my mom and how she used to dream about traveling, but never got to travel.  I became a dreamer because of her and used to visualize myself singing on TV, movies and grand concert halls. 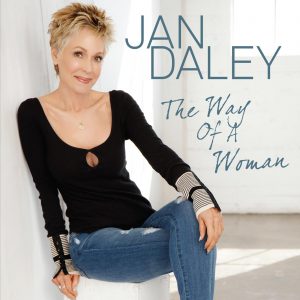 So many of my dreams have come true and now with this album it’s a dream I never imagined! “When Sunny Gets Blue” is a favorite because in high school we used to play “Spin The Bottle” to Johnny Mathis’s version and I never imagined I would end up not only meeting the writer, Jack Segal, but working on an album with him. He was my songwriting coach and responsible for getting me back into the studio to record it. When he told me I “nailed the vocal” it was more than I could    have imagined!

What has been the best part of working in the music industry ?

Performing in front of “live” audiences with great musicians. It’s instant gratification for all the hard work you’ve put into your songs and project. What would be your “dream project” ? A Mini Series or Movie I’ve been writing about my parents, their love story and how the war took my father’s life before I ever got to meet him. To be able to act, sing & write some of the songs would be the ultimate piece of legacy I could leave to my family and generations of kids growing up without ever knowing their fathers and the void it leaves in your lives. Years later I came full circle with finding 2 boxes of photographs & letters my father wrote about me, before I was even born, becoming a “Big Star.” I even found a photograph of he & Bob Hope while he was stationed in Alaska (before heading to Europe). which gave me the idea of writing this story, because of …. Read more on the Summer Edition >>> Click HERE

The Way Of A Woman : iTunes 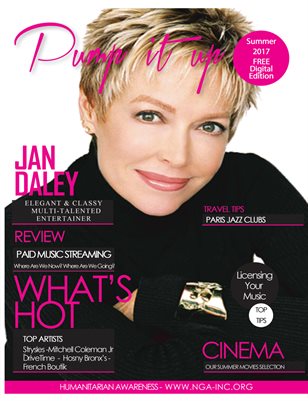 Hello Readers !I am happy to introduce you to a great entertainer Miss JAN DALEY ! The first song I heard her sing was “When Sunny Gets Blue”. She absolutely slayed it! I was hooked,I literally got chill bumps! “Who is this woman I’ve been missing out on?” I was so moved by her gorgeous…

PRINT, DIGITAL, SOCIAL!!! PUMP IT UP MAGAZINE is much more than just a website! With the bi-monthly printed edition; robust and engaged following on social media channels;  advertising with Pump it up Magazine can give […]

Before Arabian Prince officially started recording, he found his way in Los Angeles’ electro movement as one of the first west coast DJ’s to make a name. Arabian met with many ground-breaking musicians such as […]

There’s little doubt that, singer songwriter  AYA BEN could sing the traditional american song book and it would sound Soulfully good. Her voice has a certain familiar tonality to it, which one associates with the […]