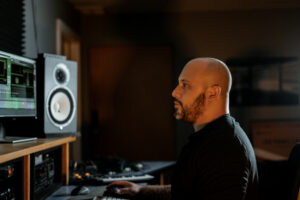 Anissa, the renowned founder of the eminent entertainment magazine Pump It Up, had held an interview with the renowned sound engineer from Evenform Studios, Damian Hasbun. Damian is an apprentice of the owner and founder of Evenform Studios, Jesse Clark whom he has been a fan of long before knowing him. Damian is now under the mentorship of King James, who has worked with names like Biggie Smalls.

Damian knew from his high school days that his career would be something involving music as he had a strong desire to surround himself with the art of music. Though he didn’t knew at that time 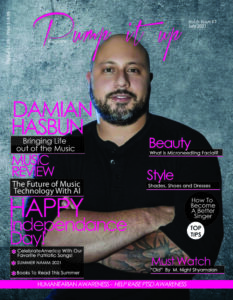 that he was going to be a sound engineer. Damian’s first gig was with Evenform Studios in Raleigh NC. Since then, he has worked with a lot of artists. His biggest achievement was to work with the band, A Flock of Seagulls, his parents are huge fans of. As Evenform works with names like DMX and French Montana, Mr. Hasbun is fortunate enough to be in the position to work with a great clientele. Damian mostly finds his work through client recommendations. Working for the largest recording studio in the city with a 5 star rating and 15 year long history do help too. His favorite DAW is Protools though he grew up using FL Studio. In his words,

“I see myself as a musical scientist, and I play the role of a psychological motivator. Taking on projects to mix and master are always a joy to me. I’m truly passionate about my work and I love a great challenge!”

According to Damian, great sound engineers are able to make the listener feel the soul of the music. Some songs require a more skilled sound engineer to make them sound the way they’re intended to sound on a spiritual level. He loves working on songs that are emotional and have an element of dance to it. Even if it’s a sad dance. In Damian’s opinion, a good mix and master means that the mission is complete and no further changes need to be made. The listener should feel the magic the artist has created.

For Mixing and Mastering quotes email your sessions to Damianhasbun@yahoo.com

To know more about Damian Hasbun,  read our exclusive interview on July Pump it up magazine Print and Digital Edition, in stores JULY 1st

31 August 2022 Pump It Up Magazine Entertainment, NEWS, On The Cover 0

30 September 2022 Pump It Up Magazine FASHION/BEAUTY, LIFESTYLE, NEWS, On The Cover, What's Hot 0

Greeting everyone, It’s officially fall, the leaves are falling but the heat is still on in California.Speaking of heat, and gossip . I’ve been hearing more and more about the developing story regarding Ray J […]

5 November 2020 Pump It Up Magazine Entertainment, NEWS, On The Cover 0

Dear Readers, As the last days of fall are upon us, we have a lot to share with you in this issue . But the bulk of this issue is our focus on new wonderful […]