If you’re of a certain age – anywhere in the mid-thirties or over – then you’ll remember a time when making home videos was something that only wealthy people could do. Purchasing a camcorder was beyond most individuals unless they were enthusiasts who’d save up or make cuts elsewhere to afford it. If you took a modern smartphone back to the early 1990s – and there was the infrastructure to make it work, of course – then people would be staggered by what it can do. In fact, even the average early 2010s device would look like magic to a 90s audience.

The devices we have these days, then, allow us to capture video in a much more straightforward way than appliances that most of us can remember being considered luxury items. The big question is, with it being so easy and so affordable to make videos in 2021, is it worthwhile? We can make videos and share them with the world using things we all own right now, and we don’t need to spend any more money to achieve it. But will they be watchable videos? Or will they look like a standard 1990s home video, all shaky and with abysmal sound quality?

Is your camera good enough?

If you go to a film set, or to a live broadcast unit, you’ll see equipment that no home could ever realistically pay for or accommodate. It’s reasonable that you’d wonder whether your standard issue iPhone could ever take pictures that would stand up to what those studios are making. The good news is that there’s no reason it can’t.

The TV in your lounge right now will usually be serving up 1080-pixel HD pictures, which is well within the capability of your cell phone. The reason that studios pay out for all that other equipment is that they need to shoot a bunch of angles all at once, may need to move at short notice, and have to capture more information than just the picture you’ll see on your TV. If you don’t need your own videos to have CNN-quality production values (and you don’t!), then your cell phone camera is good enough.

What about sound quality? 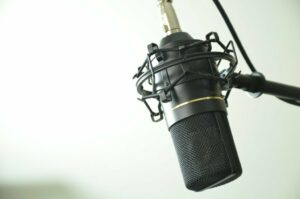 If you have a favorite YouTuber, pull up one of their videos right now and have a look at them doing a piece to camera. There’s a good chance it’s been shot on their phone, but you’re likely to see that they also have a visible microphone – and for good reason. The mic on your phone or tablet is good, for the purposes of making phone calls. But if the audio content on a YouTube video sounds like it’s coming out of a phone, you’ll notice, and it’s not a good thing.

So, yes, you’ll need to invest in a microphone for your video content if you want to show it to anyone beyond your immediate friends and family. You’ll also want to get some practice in cleaning up audio using software. Fortunately, there is excellent free editing software you can use. You’ll also want to know how to add music to iMovie on iPhone, so you can use songs to add atmos, or jingles to link segments. A decent mic will set you back no more than $200 – more advanced ones will cost more, but that’s something you can consider when you’re making money from your video content. But that’s all you really need to spend. If this still seems like a far-fetched investment that you might want to postpone, you can check out text to speech tools to narrate your videos.

What about location and additional footage?

Chances are that during a ten-minute video, you might want to have more than just a camera shot of yourself speaking. That means you’ll need to source other footage. You can shoot this yourself using the same equipment as above. You could also seek out stock footage, some of which is available for free and some of which needs a subscription. If you want specific footage, you’ll need to get permission from the copyright holder, who may ask you to pay for the privilege.

For the times when the camera is directly on you, you will realistically want to have a tripod or other means of resting the camera so that it is steady. That’s not going to stretch far beyond $15-20. You may also want to fund the purchase of a ring light to ensure the best light balance, but again we’re talking in the low double figures – $30 at most. Beyond that, it’s really up to you. You can shoot good-quality video in your bedroom, and many content creators do: decorate the space with relevant visual media, some of which you may already own, but which will in any case not break the bank.

Overall, you can make video content that people will want to watch without spending more than $300 up front. As you get more attention, you may want to buy better equipment – but it’s not going to be beyond you to fund it, if your videos are doing well.

Keeping Up To Date With Your Favorite Musicians

(Image Credit)   Music can be one of the best things in life for many people. Whether you can play an instrument or simply enjoy listening to music, this art form touches countless souls throughout […]

How Technology Can Help You Be More Productive

Photo by cottonbro from Pexels With technology becoming more and more advanced every day, it’s no surprise that people are finding new and innovative ways to use it to increase their productivity. From […]