Apple Music may still be tens of millions of paid subscribers behind Spotify in the global market, but the company now has more paying users in the most lucrative streaming nation of them all.  That’s right: Apple’s on-demand streaming service is now besting the Swedes with over 20 million subscribers in the United States, according to a recent report from Digital Music News.

Sure, Spotify beat iTunes in our head-to-head battle of the streaming giants, thanks to better music-discovery algorithms and less rapt focus on iOS and OSX usability, but that doesn’t mean we can’t see why Apple is winning the civil war of stateside streaming. Here’s how Apple Music pulled ahead of Spotify in the U.S.

Since Apple Music first became available to subscribers in 2015, the Silicon Valley giant has been playing a game of catch-up, and a key part of the company’s strategy has been a steady flow of partnerships involving blockbuster releases by big-name artists. In particular, Apple has done well to join forces with household names in the world of rap, hip-hop, and R&B — which make up over one-third of music streams in the United States, according to Neilsen Music.

Drake, Frank Ocean, Chance The Rapper, Taylor Swift, Katy Perry, and others have all signed deals for album releases via Apple Music at one time or another, either giving subscribers earlier access to their new music, or offering it exclusively to those who pay for Apple Music, though the exclusivity tact has become less common in recent years.

Drake, in particular, has seen significantly higher streaming counts on Apple Music than on Spotify.

Beyond offering listeners earlier access to their favorite artists’ new material, Apple Music has made a name for itself among die-hard fans by offering them access to artists via its popular Beats One radio service. A huge cast of cult-beloved musicians like Drake, Frank Ocean, Pharell, Ryan Adams, Deadmau5, and more have radio shows on Beats One, and this provides yet another reason for fans to choose Apple Music over Spotify; Spotify offers the very best algorithmic playlists that exist, but if you’re a die-hard fan of an artist with an Apple Music radio show, you’re more likely to choose Apple’s service.

The success of Apple Music and Beats One is credited to more than simply having big-name radio hosts, though. If there’s anything that we’ve learned from the commercial success of companies like SiriusXM — which boasts over 30 million paid subscribers — and the steadily increasing listenership turning to internet radio stations, it’s that people love a human touch when it comes to radio-style listening.

While Spotify generates radio-style listening based on user data, Apple employs iconic tastemakers like Zane Lowe and others to offer listeners compelling interviews, exclusive first-listens, and various other content that they simply won’t find elsewhere. This might not be the kind of content that draws in casual listeners, but if you’re serious about staying up on the latest pop or hip-hop releases or news, there is a serious incentive to pick Apple Music over other on-demand streaming competitors.

The fact that the Apple’s iPhone is far and away the best-selling smartphone in the United States, and that the company’s iTunes service has long been the king of download-based digital music, has made it very easy for the company to grow subscriber numbers for Apple Music. Couple the built-in iOS App integrations with Siri and Apple Carplay — one place in which the human-curated Beats One radio is particularly compelling — and it’s easy to see why those who are at home inside Apple’s ecosystem would pick Apple Music over its competitors. After all, if you already own an iPhone and a Mac, there’s probably no reason that you wouldn’t try Apple Music first.

If you already own an iPhone and a Mac, there’s no reason that you wouldn’t try Apple Music first.

Those who amassed big libraries on iTunes may feel particularly tethered to Apple Music, as the company makes it easier than any other to maintain the same playlists and various other settings that listeners had in their iTunes library. 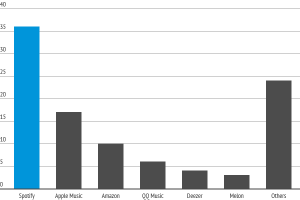 4035302520151050SpotifyApple MusicAmazonQQ MusicDeezerMelonOthers
© Statista 2018
Apple’s numbers may be growing, but with its recent public offering and the continued popularity of its unpaid on-demand tier, Spotify will still continue to be the biggest player in the music streaming game for some time. That said, Apple is doing well to build its user base in the biggest streaming music market on earth, and we can expect that the company will continue to use big-name artists, human DJs, and clean iOS integrations to work towards eventual global domination.
About Pump It Up Magazine 1691 Articles
Music | Movie | Fashion | Beauty | Fitness | Wellness | Books | Food | Travel & Events | Real Estates | Humanitarian Awareness Magazine based in Los Angeles California Reach for the stars while standing on earth! Pump It Up Magazine is the L.A. colorful, inspiring and vibrant print and online magazine founded by Anissa Boudjaoui-Sutton, showcasing dynamic up-and-coming talent and top tips from around the globe!
Website Facebook Instagram Twitter YouTube

Spotify is rolling its user-base for Spotify Analytics, the data dashboard for record labels and distributors, into Spotify For Artists, the app used by artists and their managers to manage and market profiles. The move, […]

Tips For Getting Your Song On a Spotify Playlist

[Author: Janelle Rogers *]  You’re absolutely certain you want, no, you need, to get on an official Spotify playlist. The problem is you’re not sure how to reach the elusive curators and you’re struggling to […]