Sensational songstress Gigi Vega is setting the music world aflame once again with her newest single titled “Watchu Tryna Do?“. Gigi is having a tremendous year.

She debuted her first holiday song for Christmas 2020 called “Mistletoe Kiss” – which went viral on TikTok and has risen to top 3 of the iTunes Dance Charts, reached 27 on the Billboard Adult Contemporary (AC) Charts, and top 30 on the Radio AC Charts. 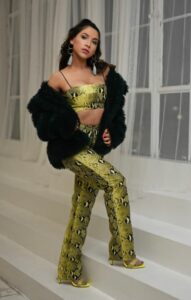 is a soulful track with exceptional sound quality. The song is an An elegant R&B Dancefloor Gem!

The upbeat vibe is accentuated with a rich bassline and moving drum pattern for a completely scrumptious groove. Gigi’s vocal performance is awesome as much as it is compelling. She really embraces the song’s theme of infidelity as evidenced by the heartfelt texture of her voice.

Another great aspect of Watchu Tryna Do? is the tune’s music video, which perfectly demonstrates Gigi’s charisma and mystique. The music video is equally dramatic as it is colorful. The opening scene depicts Gigi being confronted by another woman as to the whereabouts of her man at what appears to be an outdoor gathering with a few friends at her home. The scene transitions when Gigi enters her home to check to see if her beau has called or left s message. Next, we find Gigi on the dancefloor implementing some wonderful moves as she unleashes her innermost concerns about love and faithfulness.  The video unveils a real-time display of Gigi’s emerging aptitude as an artist.

Watchu Tryna Do? is a brilliant song that has a wide appeal. Gigi Vega is a tremendous artist with a big heart with the looks and talent to match.

Watchu Tryna Do? is a surefire hit that exemplifies all that we love about the harvest that raw talent brings.

Karma the Artist – “The Birthday Song”

Karma the Artist is a R&B Recording Artist, Songwriter and Producer from Los Angeles, CA. She has years of experience touring, traveling and recording all around the globe as a vocalist, host and entertainer. During […]

this is a fantastic version of a Christmas classic featuring a first rate vocal performance by Heidi Tann. Her charismatic voice is backed by superb musicianship and high end production, resulting in a modern yet authentic rendition of an evergreen Yuletide song that still means so much to so many. […]