1. Raymond you go by the name Ray. It’s come to our attention that your Mother had named you Ray for a special reason. Would you share that with us please?
My mother was a fan of the Great Ray Charles and when I was born Ray Charles, a Georgia native, was
scheduled to play in my hometown. My mother couldn’t attend, but vowed that she would have her
own little Ray Charles to see forever. As coincidence would have it I was born on May 3, the birthday of
another famous Georgian, James Brown.

2. Which artist has influenced you the most over the span of time. From when you were a young lad up and until now? Please tell us what it was about this artist or their music or both that impressed you so much.
The artist that influenced me the most was Jimi Hendrix. He is regarded as one of the most influentialelectric guitarists in the history of pop music and is arguably the greatest instrumentalist in popular music. He began playing gigs on the Chitlin’ Circuit, with the Isley Brothers’ backing band, and after that with Little Richard through mid-1965. He was a former soldier, guitarist, singer, and songwriter whose military experiences was often conveyed in his playing and songwriting. Jimi was an experimental
visionary and his music was outside the box and crossed all musical genres.

3. Your latest album is titled “Epiphany” and the lyrics that you have penned for this new release are very personal in nature. Additionally, the compilation crosses genres. Gospel, Blues, and R&B. What was it that was so eye opening that it led you to follow your heart and not worry about releasing an
album that was genre specific?

In my faith there is a feast or celebration called Pentecost. This when the light or spirit descends upon
the Apostles and from that moment they are able to communicate with people of different regions,
languages, and nationalities. For me Epiphany is intellectual enlightenment, knowledge or awareness
gained from internal inspiration, external events or other people and from a musical perspective should
be broad based communicated to all people.

4. One of the tracks on “Epiphany” is titled, “Dixie No More”. You’ve actually went a step further and produced a music video by the same name. The message is clear but where were you and what motivated you personally to relay the sentiments as you have laid down in “Dixie No More”?

When I was a little boy I spent the first four years of my life on a sharecropper’s plantation called “French Plantation” the next plantation over had pretty green houses and a nice road and was called  “Dixie”. Granted there were no special privileges gained from living there, I just liked the green houses.
As I grew older and understood the system I came to the conclusion that “Dixie” is most often associated with those parts of the Southern United States where traditions and legacies of the Confederate era and the antebellum South were and, in some cases, still are prominent. Today, “Dixie” is not just the remnant of a bygone era nor has it been confined by constraints of regional boundaries, but instead, “Dixie” has expanded and redefined itself to reflect a certain set of cultural assumptions,
mind-sets and traditions revered and embedded in regions not limited only to the South or North America, but around the globe. “Dixie” tends to manifest itself in racial, social, criminal, economic and eligious persecutions which are often propagandized for political and economic gains.

5. You’ve chosen to favor the bass more so than the guitar. Were you motivated by hearing one of the reats such as Willie Dixon? Please tell us how this election came to be a prominent instrument for you.

I do play Bass as secondary instrument and living in the South and Louisiana specifically, blues, jazz or funk bass is usually what I hear when writing a song. But along with Willie Dixon I also listen to the likes of James Jamerson, Larry Graham, Ray Brown, Marcus Miller, Victor Woote, George Porter Jr, and that’s
just the tip of the iceberg. 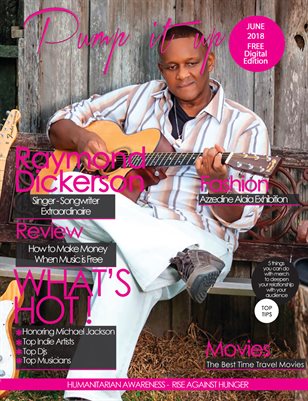 “Summertime and the living is easy”Looking forward to days of LA sunshine and beach weather around the world. We here at Pump It Up Magazine welcome you to a warm June edition with our cover artist of the month Raymond Dickerson.We also have a special tribute to the legendary Michael…

The holiday season is generally thought of as a time of joy and love, but for many people, it’s a time of loneliness. Some people live far from family and miss seeing their loved ones this […]

Joni Mitchell: ‘I’m a fool for love. I make the same mistake over and over’

As she releases a box set of her earliest recordings, in a rare interview Mitchell talks about life before fame, the correct way to sing her songs – and her long struggle to walk and […]