Dominic Argiro is an Independent singer/guitarist and songwriter from New Jersey creating multi layered instrumentation with unique but simple melodies that anyone can enjoy. Dominic has been recording new music for years and studied music at both Berklee College of Music as well as Five Towns Music College and has developed a style heavily influenced by groups like The Eagles and Garth Brooks but with his own unique guitar style and melodies worked into the material. Pop/Rock with definite country influences.  Hailing originally from Long Island New York, Dominic spent his early years out playing and honing is performing, singing and instrumental talents and is fluent in guitar, keyboards, bass guitar and also saxophone.

Dominic has been creating music for several years and built a loyal following of several thousand of social media on Sound cloud,  Twitter  and Spotify (links below) and has had songs played on several international and college radio outlets, such as   HGB Radio http://www.hgbroadcasting.com/ ,  WXIN 90.7 Rhode Island College radio http://ricradio.org/ , WOAFM99 UK radio https://www.woafm99.com/ ,  and u-Rock radio Montreal http://cxmx.urockradio.net/, WPPB radio LA https://bbpnetwork.com/kbbpradio/kbbpradionews/ and many others just to name a few.

He hopes to continue to expand access to his music to a new fan base and reach new markets with a long term goal of obtaining a recording contract as a performer or possibly as a songwriter. Dominic has elaborate experience as

a live performer and works with and also enjoys working with other artists.

Great to have you on Pump it  up Magazine, Dominick, Please, introduce yourself?
Hey my name is Dominic Argiro a songwriter, musician, guitarist, singer from New Jersey, USA.
What got you into music and made you realize that it was your chosen path?
Well i got my first acoustic guitar around 7 years old and i just loved challenging myself and also saw it as a way to express myself and realized that i had an acumen for it. Wrote my first songs around 13 years old and realized that that was a way to take my personal expressions and attempt to reach other people which was also appealing for me as well.
Tell us about your new music “New Years Love”? And what’s the story behind it?
This song was written during a time when myself and my wife where going through some harder times and we where trying to find ways to connect. It happened to be around the end of the year. We both agreed in the pending new year to do certain things for each other to try and make our relationship better. The idea of everything the New Year represents in people’s life inspired me to write a song about love and hope for the future but also something more upbeat and fun at the same time.
What makes your music unique? And how would you describe it? (genres/sub-genres)?
Usually my songs fall into either a  pop/rock or country/pop category a lot of times based on a guitar riff i come up with. However i  enjoy using modern technology and combining that with my guitar and coming up with something new that can sometimes bring out the funk as well.
Who are your biggest musical influences? And any particular artist/band you would like to collaborate with in the future?
I love the songwriting style of varied artists such as the Eagles, Garth Brooks and Billy Joel, but also always loved the groove and lyrical styling of Tupac and various other similar artists. I also listen to a lot of jazz guitar music.
If i could collaborate at all with anyone in a more current  it would have to be either Florida/Georgia Line, Zach Brown or even Bruno Mars.
Which is the best moment in your musical career that you’re most proud of? (awards, projects or public performances etc)
My biggest moment has to be when i had one of my songs “Let’ Dance Tonight” receive over 1 million downloads on a worldwide basis on one of the distribution sites that i use for my music.  It took a while as the song was out for a bit but when i crossed that thresh hold i was pretty happy with that. I am hoping that my biggest moments are still ahead.
How do you balance your music with other obligations – family, friends or work?
Well i do maintain a full time position and work for a financial firm. I also have a daughter so sometimes it gets hard to find the time for recording/promoting and performing. I find the best thing to do is set small daily/weekly goals.Some examples of this are “Tonight I am just gonna write some lyrics for that new beat” or  “I am going to schedule a studio session for three weeks from now so i need that new track done”. Best to set small attainable goals so you don’t get discouraged or overwhelmed. My wife is also extremely supportive which means a lot.
What advice would you give to aspiring musicians? 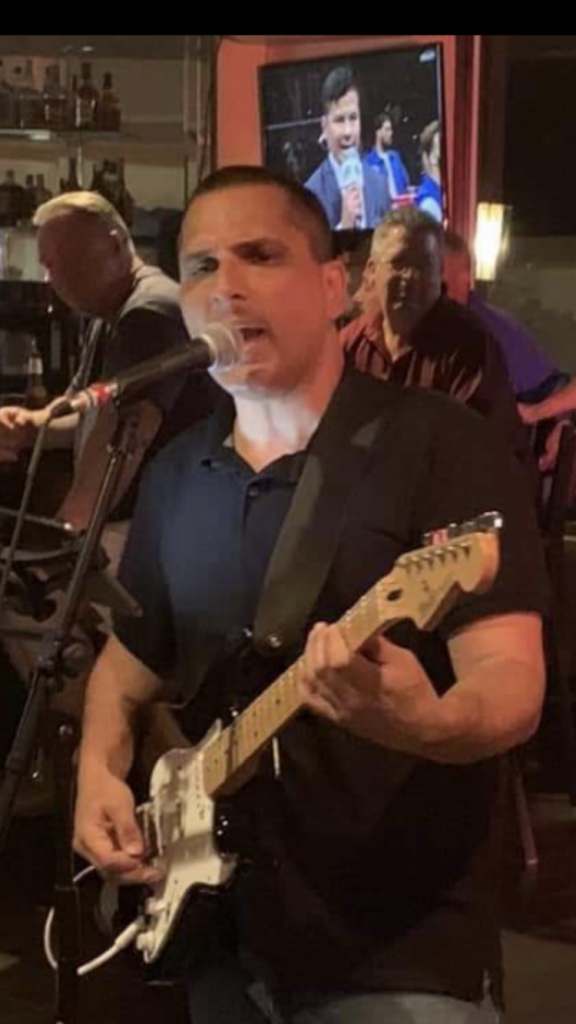 I would say to keep doing what you love because it is a  part of who you as a person you should never really ever have to stop being yourself because of a job or responsibility. Like one of my lyrics says/  “Don’t ever stop just be who you are, and the world will come with you”.
If you had one message to give to your fans, what would it be?
I would want to personally thank everyone every follower, fan every listener and every critic. Also everyone who has ever given me good advice  you have all made the journey a fun and inspiring one. Always be on the lookout for new music from me for as long as i am able to do it
What’s next for you? Any upcoming projects or tours?
Well i just revamped my studio and got some great upgraded gear which i am pretty happy about. Try to keep a consistent pace of writing and recording so always follow my Spotify, Soundcloud or Twitter for those new releases.
I am also working building my social media platform as well as making some changes to my band lineup for my band “Generation Gap”  we combine my new original songs with some fun covers and do an awesome show. Booking dates around the New York, New Jersey area for the fall and Winter months ahead.