The duo have a new memoir on the way, too

Tegan and Sara have released ‘I’ll Be Back Someday’, the first single from their forthcoming new album, ‘Hey, I’m Just Like You’.

The new record is released on September 27 as a collection of re-recorded versions of songs that the twin sisters wrote in high school together.

The pair found old cassette tapes containing their very first songs, which were written between the ages of 15 and 17, when they were researching their upcoming memoir. ‘Hey, I’m Just Like You’ reinvents one of the original recordings they discovered.

The duo have also shared the tracklisting from their upcoming album – see below.

Sara has recalled the period when ‘I’ll Be Back Someday’ was written. “We had been begging for an electric guitar, and on our 16th birthday, we got one. Of course, we had to share it, so it became a weapon that we stole from each other’s rooms, barricading ourselves behind locked doors with guitar in hand.

“Screaming over the small amplifier, we tested our voices by writing punk songs, shredding our thumbs on the strings. With only minor tweaks to lyrics and structure, we tried to remain true to the original essence of each song.” 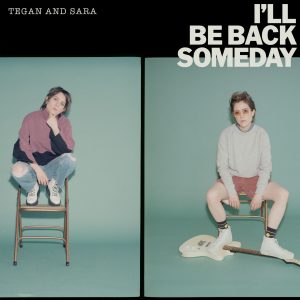 Tegan and Sara – I’ll Be Back Someday artwork

According to a press release their upcoming memoir, High School will “tell the original story of Tegan and Sara for the first time, bringing unprecedented depth and dimension to their formative years.” It’s set for release on September 24.

Speaking of the project, the pair said: “How did you start your band? When did you know that you were gay? What were you like before Tegan and Sara?”