Houston-based guitarist CLAY MELTON and his trio pack a mighty sonic wallop with their first full-length CD, “Burn the Ships”.

The title alludes to a captain ordering his men to leave no way of turning back, pressing them to make the absolute most of their future ahead. That all or nothing vibration permeates the music herein. As they traverse a cavalcade of styles, no song sounds like another – impressive yet potentially adverse in branding Melton with an identity that listeners can define him…a reality he likely relishes thus far.

The songs are full of winding instrumental breaks and detours, moving from ebbing acoustic musings to epic electric soundscapes.

Lyrically, Melton waxes poetic about a woman whose image he sees in all of nature on “Wind & Wave” (like John Mayer meets the Chicago horns), the groovin’ Southern lilt of “Soul” and of eluding the gloom of “Rain” with his own personal “Couldn’t Stand The Weather.” And then there are parcels of common knowledge to remember: “Love Out Loud” (“hold on to what you love it could all be gone tomorrow” being the hook, led into grandly as banded with the instrumental title track) and in the machine gun syncopation of “Timing’s Everything.” Most pointed of all is “Battlement,” priming the people to revolution in these swiftly darkening hours upon the world stage. Melton, along with bassist Raymon Minton and drummer Zach Grindle, are earnest in this endeavor (solidly produced by Dan Workman) and a well-oiled machine of power, precision and collective inspiration in their arrangements of Melton’s compositions as a unit.

1) It’s the end of the year, what’s next for Clay Melton?

Since we returned home from tour at the end of October I’ve spent the last month on a huge writing binge. I suppose when you’re on the road focusing on the every day and the logistics of putting on a good show every night you almost don’t have time for a lot of emotions. I definitely felt them come back tenfold when we got back to Houston and have been finding lots of inspiration inside every day. We’re going into the studio this month working on some new tunes to share in 2018 and will be touring again in the spring!

2) Tell us the brief history of Clay Melton 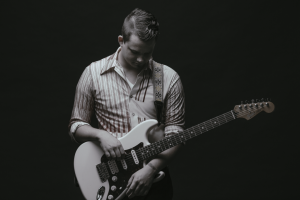 I was initially drawn to music around the age of 10 when I heard Jimi Hendrix’s version of “All Along the Watchtower” in my fathers car. When I turned 11 I started learning and by the age of 13 I began playing at blues jams in Houston where I learned to share the stage with many seasoned blues cats here in town. I have a very deep personal connection with the blues and the emotions it carries not only through myself when I get to experience performing it but to anyone in the room. Performing live definitely hooked me in a way that left me totally infatuated with the process of creating and performing music. Since then I’ve spent years playing in bands as teenagers do. Trying to write songs from the time was probably 14, which is another aspect of music that has a genuine hold on my soul. I feel Ineed to write and can feel very “off” when I haven’t had the time to create the way I like to.

When I was 16 I was named one of the top ten Texas guitarists under 20 by the Dallas International Guitar Festival. Two years ago I put out a self titled EP which achieved Triple A radio play across America. This past September I released my first full length album, ‘Burn the Ships’ which we recorded at SugarHill Studios produced by Dan Workman. It was an exciting process a huge learning experience that left me driven to continue to create. We wrapped up a headlining East Coast tour this past fall and we’re heading into December with new songs I’m ready to record and share in the next year!

3) Who are your musical and non-musical influences?

I’ve been very conscious of ‘input’ lately, which I deem as anything that we consume, even passively. I’ve canceled the Netflix account, bought a few more books and tuned into the aspects of life that seem to inspire me. Musical influences are always changing but my rocks and sort of origin influences include: Jimi Hendrix, Stevie Ray Vaughan & John Mayer. Lately I’ve thoroughly enjoyed the indie rock band, Pinegrove. My non-musical influences include certain books that have brought me inspiration & clarity through life. I would say “How to stop worrying & start Living” by Dale Carnegie had the most significant affect on my general outlook and output.

4) What are your dreams and goals?

My true aspiration is to be able to create for the rest of my life and have my career centered around creation & performing. Not just creation for myself but I have a deep desire to collaborate with other artists within my life time. Theres nothing quite like making music happen inside of a moment with others. Professionally I would love to share my music & creations with people around the world.

5) Describe your show, visual and musically?

I perform as a three piece band. Zach Grindle on the drums and Raymon Minton on Bass. Both of them also performed on the newest record. Our shows are definitely rock n roll with ups and downs because we like to take things away, both dynamically and stylistically. There are moments of genuine improv that make every night different and special not only for the audience but ourselves as well. Visually, rock n roll is the word that comes to mind. I jump around, bop my head (quite intensely at times) and sweat all over my guitar. I like to keep the energy high and honest.

6) Who came up with the name of your Album “Burn the Ships” and why?

The title comes from an excerpt out of the book I mentioned earlier actually, “how to stop worrying and start living” by Dale Carnegie. It is a story of a conquistador who when him and his men arrived where they were to conquer they were heavily outnumbered. He ordered his men to burn the ships. This was the ultimate motivator to achieve their goal or lose their lives in the process. It very much relates to my drive and ethic with my passions and music. 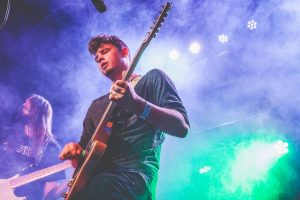 Previous to putting out our first EP two years ago I was attending college in Houston doing my basics and studying Jazz. I had always been very honest with myself that what I really wanted was to perform and create and that no college degree or 9 to 5 job would truly make me happy or get me closer to that goal. I decided that I could go back to school at any point in my life and I wanted to devote myself fully to the things I am passionate about. It’s a phrase that applies to anyone I believe that may feel overwhelmed by the harsh reality of fighting an uphill battle to do what they love. When I speak of it I hope that it inspires others to do what THEY love.

7) What advice would you give to fellow rock musicians (bands) Write as much music as you can, invest in a cheap DAW (digital audio workstation, i.e. protools, Logic, GarageBand) go out and support music in your city as much as you can, never stop studying or trying to improve as a musician and just do what you love unapologetically.

8) Tell us about your next show and why we should be there?

Our first event of 2018 will be Bowielvis Fest in Houston, Texas Jan 6th.

This is the 9th year of the festival put together by Splice Records and Saint Arnolds Brewery. Lots of Texas bands perform a half tribute half original set of either David Bowie or Elvis Presley. It’s a celebration of both artist and is always a great time! 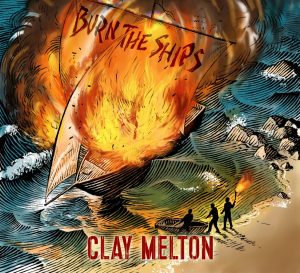 Album reviewed by A. Scott Galloway

Starting Over: Aneessa’s Courageous Journey from France to LA, Revitalizing Soul II Soul’s “Back to Life

“Back to Life (However Do You Want Me)” by Soul II Soul is an iconic song that captures the essence of hope and resilience. This powerful track is about finding the courage to rise above […]