Aday is small startup with lofty ambitions to, say founders Meg He and Nina Faulhaber, design clothes that help save the planet.

“As entrepreneurs designing for the future, we have to think about what kind of world we want to live in,” Faulhaber tells me. “At our core, we believe that it needs to be the healthiest planet possible, and a sustainable future where we can all live in sync with nature.”

For Faulhaber and He, the clothing of the future created by the three-year-old brand is as billed: If you’re envisioning outfits from a sci-fi movie, you’re not wrong. Aday’s clothing is slick, urban, and made from cutting-edge technical fabrics.Their best-selling Throw and Roll pants are made from moisture wicking fabric that sculpt the body and are so versatile that they have been worn both to run a marathon and meet heads of state. Their blouses fall like silk but resist wrinkles and are machine washable. Sweaters are thermo-regulating, so you never feel too hot or too cold.

The tech behind Aday’s clothes also comes with a mission: reducing the environmental toll that our obsession with the latest designer dud takes.

By some estimates, the apparel industry is the second-biggest polluter in the world, after the petroleum sector. Most fashionistas don’t think twice about what goes into the garments hanging in their armoire. The life cycle includes everything from the pesticides doused on the cotton crops to the petroleum to make the polyester and toxic dyes to color our schmattas. Then there’s the energy consumed by the factories, the wasted scraps of fabric from the cut and sew process, and distribution—all for a dress you might wear three times before it ends up in a landfill.

Faulhaber gives that there is no one answer. “If you have a natural material, like cotton, that tears easily and does not have many wears, then it’s not very sustainable,” she says. “But if you have something that is made of plastic that never decomposes when it is thrown into a landfill, that’s terrible as well.”

Then, there are things a brand can’t control, like how the consumer uses the product. Aday strives to create clothes that are versatile and durable, but there’s no telling whether the customer will keep wearing the same product for a long time.

“We can design something that is seasonless and long-lasting,” she says. “But there are customer choices that will have an impact on the environmental footprint, like whether to throw it away at the end of its life cycle or whether they recycle it.”

By designing clothes that last longer–and can be worn across seasons–Aday is in the unusual position of trying to convince consumers that a smaller, versatile, and durable wardrobe is a major way to do your part. Essentially, they’re advising, shop less–but shop smart. 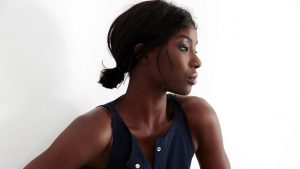 Small can be mighty

Two years ago, the Aday founders sat down with their team to brainstorm innovative ways to be more sustainable. It was a challenge, especially for a just-launched brand in a competitive marketplace. The brands that were doing eco-friendly right were bigger and had deep pockets. “There was one clear winner: Patagonia,” Faulhaber says. “As a brand, it stands for so much more than just clothing. There is a deeper reason that it is in the world.”

Patagonia has been moving the needle for 45 years, and rakes in $200 million a year in revenue. Another impressive brand, Reformation, has raised $37 million in VC funding, and has built an eco-friendly factory from the ground up in downtown LA. Everlane has spent years finding sustainable manufacturing partners around the world.

“Until then, we had already intuitively built what we thought was sustainable fashion,” Faulhaber says. “We picked manufacturers that use renewable technology. But we wanted to find ways to really push the envelope in sustainability.”

And He says that in some ways, being a small brand made it possible to try out new methods quickly and nimbly. Some of the bigger companies they admired often took a long time to turn their sustainable goals into reality, simply because they were dealing with more inventory and more complex supply chains.

“The truth is that not many companies do a great job,” He says. “We are a very small company, but we thought we could still try new ways to do things better. We decided to call these experiments, because we wanted to try things out on a small scale. But in the end, it will help us think about how to push the industry to have higher standards.”

The brainstorming came with three proposed experiments. The first involved minimizing the wasted material during the cut and sew process. Rather than designing a pair of trousers thinking entirely about the way they fit on the wearer, Aday’s designers developed patterns to maximize the use of fabric. For the Easy Day pants, the factory cuts the various parts–from the pant legs to the waistband to the hem–out of a rectangular swath of stretchy silk crepe, leaving very little excess fabric. And rather than waste these scraps, they decided to collect them to upcycle them into a future garment.

The second involved using a fabric made of 41 water bottles that can be recycled back into fabric at the end of its life cycle. The Waste Nothing jacket is made from post-consumer bottles broken down into pellets, then spun into a single piece of fabric in a mill in North Carolina. The yarn is sent to Taiwan, where it is blended with other materials to create Aday’s proprietary fabric. The final product has kimono sleeves and can be worn as a jacket or reversed to be worn as a shirt. And when the customer is ready to part with it, it can be broken down and turned back into fabric.

The third experiment entailed finding a factory that uses as much renewable energy as possible. To create the Got the Scoop tank, Aday partnered with an Italian mill powered by solar panels and a Portuguese factory that creates heat generated from olive pits and also taps the sun.

The trials have helped the brand rethink how it makes its full line and allow it to tell a story about what its goals are and invite customers to learn more. “We found that by telling these three different stories we piqued a lot of interest,” Faulhaber says. “People asked a lot of questions and they are excited about us as a brand.”Ultimately, Aday’s founders believe the customer they are serving–educated, relatively affluent women–have unlimited choices when it comes to fashion. And ultimately, being the most sustainable brand possible is not just satisfying for Faulhaber and He as founders. It is also a way to win new fans.

“People can be very thoughtful when they purchase something,” He says. “They want to know what this product does to the people around them, to the environment, to their life. They want to know how an item they buy can create life-giving happiness.”