This book exist to celebrate the talents and spirit of the many gifted Oklahomans who have touch the world. These Oklahomans have changed the many sectors from sports, racing, dancing, medicine, entertainment, acting, religion, writing, ballet, coaching, TV personalities and many many other fields. 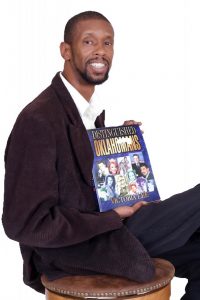 Born in Inverness, Florida, Harold Whaley Jr. To the parents Alma Whaley named after his father was raised in Zuber, Florida just outside of Ocala, Florida. Ocala is Home to the world’s greatest Horse Farms. Yep, thats where Harold sowed his young oats. Living on a farm, raising cows, pigs, chickens and various vegetables, fruits, & grains for public consumption. His great-grandfather was a lifetime farmer, and he was a part of it. Music was a major piece of Harold’s life, he would find himself practicing his sunday morning gospel show on the back of the tractor while plowing fresh seeds for the watermelon fields at 11 years old.

While attending North Marion Middle school, He joined the band, because they didn’t have a chorus. He chose the Trombone, and excelled quickly, eventually becoming the lead trombone player. In High School he was awarded for Outstanding Jazz Band (2 years), and “The John Phillip Sousa Award.”

Turning down scholarship offers from University of Florida and FAMU, he chose to serve his country. Joining the US Navy in ’82, he chose the job of a radar operator or in Military terms Operation Specialist (OS).

Harold started making moves to be prepared for this new medium, that would later become an important part of his life when he departed the military after his 11 years tour of duty. Living in San Diego afforded Harold the chance to see the proliferation of North San Diego with newly founded Internet companies, who mostly benefited from the Dot-com fortune in the early 90’s.

In 1992 Harold retired early from the Military to fully pursue his passion of music. He was soon signed as a producer/artist with San Diego independent record label Deemo Records helmed by marketing guru Arthur Mitchell. Deemo Records would eventually become a subsidiary label under Solar/Hines/Epic out of Los Angeles. The infamous Death Row records crossed his path when Harold joined a team of producers who worked on the Platinum CD “Murder was the Case”.

In 1999, he was embraced by the city of San Diego with the awarding of the San Diego Music Award as “Best Urban Artist. Shortly there after, a BET.com online poll nominated Harold as “Breakaway Artist of the Millennium in 2000.

Learning to market and sell his own products were a goal that Harold saw as achievable via the Internet and mobile markets. Adding another skill-set to his arsenal, he embarked on web design by designing award-winning websites for Gospel Superstar CeCe Winans and Motivational Speaker “Les Brown” and the TV show Soul Train.

In 2002 Television Show “Tee’d off”, was the first nationally syndicated project he produced. Late 2002 saw him received the position of Program Director for the Urban Network Magazine’s two Online Radio Stations. The first Nationally distributed magazine with an online radio station. The year 2003 brought in the Mobile Marketing Era, where he introduced download cards and Flash drives to the entertainment industry at the Urban Network Summit, by giving away free Flash drives and Download cards to all attendees.

2006 saw him shift to the Virtual World after learning of a newly minted millionaire in this space. Harold began creating virtual businesses and showing entrepreneurs how to maintain a virtual presence that can be both entertaining and financially rewarding. He has created or co-created various unique virtual platforms that range from Convention Centers, Hospitals, Churches to Night Clubs. He has designed and branded theaters for the legendary country music Cash Family (Johnny Cash Estate). He understands the virtual environment is the now, and the future of the Internet. With energy cost rising, and expensive travel cost, the virtual space is the perfect compliment to effectively conducting green technology business. He is a minority owner in the virtual world platform inworldz.com

In 2007 Harold implanted his creative spirit and vast digital knowledge in the American Basketball Association (ABA) as VP of Strategic Development, he directs the league on the ABA’s digital footprint.

He started his own ABA franchise in 2012, The West Michigan Lake Hawks, based in Muskegon, Michigan. The Lake Hawks have finished in the top 20 the first two years of their existence and were featured in a game on ESPN in January of 2015. Harold added another team to his portfolio in 2015, the Tulsa Twisters based in Tulsa, Oklahoma. The Twisters feature various Native American Players on the team.

Urban Network Digital awarded Harold with a “Digital Pioneering” award at the 2015 Urban Network Summit in San Diego, California in June of 2015.

Harold’s Extreme networking has blessed him to be a part of many unique ventures including, breaking Grammy award-winning artist, motion picture funding, production, marketing and promotion, oil, gold, international commodities, crypto currency, virtual worlds, holograms, artificial intelligence and many other

Harold is a husband and a father of 4 daughters and 1 Son and 5 grand children. Future technology is an ever-important facet, and this modern day digital cognoscente is the poster child for it.

Top Tips for Writers: How to Get Your Book Talked About and Increase Visibility

Writing a book is a monumental task, but getting it noticed by readers can be even more challenging. Here are some top tips for writers looking to get their book talked about: Build an online […]

Bilingual Books: How to choose the right book for your child

Reading bilingual books to children is a great way to introduce them to new languages and cultures. Bilingual books are books that are written in two languages, usually English and another language such as French, […]