Each pair of denim is named after a character from Netflix’s “Stranger Things” — there’s a Will, a Nancy, a Mike, an El and a Lucas — and the general concept seems to be a nod to the show’s Demogorgon-filled parallel universe, the Upside Down.

The shorts and pants cost $385 and $495 respectively — and if that price makes you wanna jump, jump out of your seat, that totally makes sense. Many people online feel the denim is more reminiscent of the ’90s hip-hop duo Kris Kross, who were known for their backward ensembles.

But who knows? Maybe some people will like the fashion enough to drop a few Benjamin Franklins on them. 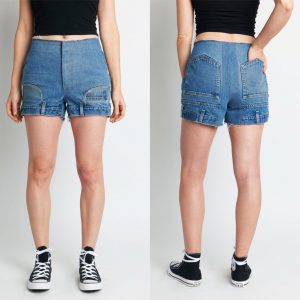