Celebrities have given us some great photos while receiving their stars on the Hollywood Walk of Fame over the years.

The Oscar-nominated actress stretched out on the ground next to her star on Nov. 19, 2021.

HOLLYWOOD — A star on the Hollywood Walk of Fame unveiled this Friday honoring Salma Hayek Pinault for a career that has included receiving a best actress Oscar nomination.

“After the pandemic is resolved, we hopefully will go back to normalcy for our ceremonies with fan pits,” Martinez said.

“Pina was a very interesting woman,” Hayek Pinault said. “She’s clairvoyant. A psychic. She can tell the future. When she and Patrizia meet, they immediately connect, and something that starts as a professional relationship becomes a very strong, important friendship for both of them.”

Roberto Bentivegna, who wrote the screenplay for the three-decade saga of the family behind the Italian fashion empire with Becky Johnston, said Hayek Pinault “brought a real humanity to Pina, a woman who really comes to care about Patrizia.” 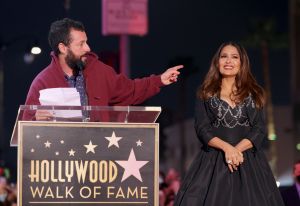 “She could’ve been played her in a very cynical way as someone who is just using Patrizia for her money, Bentivegna said. “Instead, Salma and Lady Gaga developed a real chemistry, both on screen and off. It was fantastic.”

Born Sept. 2, 1966 in Coatzacoalcos, in the Mexican state of Veracruz, Hayek Pinault began her career in 1988 in the Televisa telenovela “Un Nuevo Amanecer.” The following year she portrayed the title role in the Televisa telenovela “Teresa” about a beautiful and intelligent young woman desperately seeking to flee from her impoverished neighborhood.

Hayek Pinault moved to the Los Angeles area in 1991, appearing in episodes of the syndicated action crime drama “Street Justice,” the HBO comedy “Dream On” and the NBC comedy “Nurses” before making her film debut in the 1993 drama “Mi Vida Loca” about young Mexicanas and Chicanas growing up in then gang-ravaged Echo Park.

Hayek Pinault made her feature film debut in “Midaq Alley,” a 1995 Mexican film about residents in a lower-middle class neighborhood of Mexico City.

Hayek Pinault began her collaboration with director Robert Rodriguez with the 1995 neo-Western action film “Desperado.” She would later appear in his films, “From Dusk Till Dawn,” “Once Upon a Time in Mexico,” “Spy Kids 3-D: Game Over” and “The Faculty.”

Hayek Pinault received a best actress Oscar nomination in 2003 for her portrayal of Mexican artist Frida Kahlo in “Frida,” for which she was also a producer.

Hayek Pinault received an outstanding guest actress in a comedy series Emmy nomination in 2007 for her recurring role of magazine editor Sofia Reyes in the ABC comedy-drama “Ugly Betty,” on which she was also a producer.

Hayek Pinault also had the recurring role of nurse Elisa Pedrera on the NBC comedy “30 Rock.”

22 August 2017 Pump It Up Magazine Cinema/TV, INDIE ARTISTS, IndieMovie, MUSIC REVIEWS, NEWS Comments Off on WHAT YOU NEED TO KNOW TO BREAK INTO THE FILM MUSIC INDUSTRY

Everyone knows it’s hard to break into the music industry. The hours are long, the starting wages and entry-level jobs aren’t glamorous, and there are hundreds, even thousands, of people competing for whatever role you’re […]

What To Expect From 47 Meters Down 3

What’s the status of 47 Meters Down 3? In 2017, British filmmaker Johannes Roberts released the firs 47 Meters Down, with new installment hitting theaters two years later in August 2019, titled 47 Meters Down: Uncaged. Both films […]

10 December 2016 Pump It Up Magazine NEWS, On The Cover Comments Off on December – January 2016 | Special L.A. With Marylin Monroe

Hello Readers ! I love L.A. … The entertainment capital of the world ! City of dreams and infinite possibilities , thanks to its energy, beautiful weather, creativity, and of course opportunities, and the city […]