Michael B. Sutton is an Urban/contemporary soul singer who has worked at Motown, from California. Inseparably engaged Music, romance and sensuality, in a silky ménage a trois that both soothes and arouses !

Some artists use their own music as a way to express their feelings and present themselves to the audience in the most honest way possible.

This is certainly the case of Michael B. Sutton, a reformer with a particular focus on creating songs with the appeal of pop, yet the intimacy of a singer-songwriter.

His studio album, “Hopeless Romantic” is a collection of songs that have sweet, mellow and unique tone. A true hopeless romantic in his own right, Michael set out to record an album full of beautiful and meaningful love songs that will surely resonate with the audience.

These tracks echo the work of artists as diverse as Damien Rice, Ed Sheehan or John Mayer, but Michael certainly has a style and a personality that is purely unique. I love how he is able to create a cozy and intimate setting through his music, and the way every single arrangement is absolutely impeccable.

Michael’s songs are intimate, yet also very uplifting and energetic. While some moments on the album can be seen as somewhat dark and melancholic, there are many other songs that have a decidedly more positive twist, allowing the listener to truly take off on a wonderful musical journey, full of interesting feelings.

For almost 20 years, singer/songwriter Michael Sutton has been an important hidden force in the music industry. Writing and producing countless songs for artists such as Stevie Wonder, Thelma Houston, and Smokey Robinson, Sutton became known for his behind-the-scenes efforts more than anything else. Writing many theme songs as well, he branched into movies and even scored a few films before the late 90’s. By that time, he began tiring of staying in the background and desired an active role in his own music. Writing a series of soulful love ballads, Sutton shaped his own brand of smooth R&B during the next few years, eventually stepping into the studio to record. When he emerged, Hopeless Romantic became the first solo album from the longtime songwriter.

In the past, Mr. Sutton has penned hits for Smokey Robinson [“There Will Come a Day (I’m Gonna Happen To You)”], Cheryl Lynn (“Shake It Up Tonight”) and a disco smash for The Originals (“Down To Love Town”). But during his seven years at Motown as a writer/producer, he earned his reputation as the go-to guy for quality album cuts that often became “fan favorites” – the tracks that make albums enjoyable from start to finish. This distinguished resume includes a young Michael Jackson (“Cinderella Stay Awhile”), Jermaine Jackson (“Stay With Me”), Thelma Houston (“Today Will Soon Be Yesterday,” from her Gold-selling album Any Way You Like It), Switch (“It’s So Real,” from their self-titled platinum debut), former Temptations lead singer Dennis Edwards (“When The Lights Come Down On Love”) and ‘The Ice Man’ himself, Jerry Butler (“I Don’t Want Nobody To Know”). Most recently, Texas rapper Scarface with special guests Jay-Z & Beanie Sigel sampled The Originals’ “Sunrise” (yet another song that Michael co-penned) for the Source Award-winning hip hop hit, “Guess Who’s Back.”

It is this Motown apprenticeship that thoroughly seasoned Michael B. Sutton into the artist he has become on Hopeless Romantic – 15 songs (and 2 interludes) of sensual inspiration from the man with “the velvet voice.” It opens with the soul synthesized minuet “Body Music,” then descends into a two-song story about seducing an abandoned beauty: “If You Let Me Love You (The Second Time Around)” and the bumpin’ “Give It Up.” This is followed by the blissful trinity of “Do That To Me,” “Sweet Surrender” and “Flight,” all quintessential bedroom grooves in the key of A: amour. Next is a very special treat for Michael’s longtime fans: a reunion with his former wife Brenda Sutton (now Turner) on a remake of Roberta Flack and Donny Hathaway’s 1972 classic, “Where Is The Love” (penned by Ralph MacDonald and William Salter). Then, Michael takes a naughty detour downtown with the ultra-provocative “Feelin’ Down (Go Down On Me Blues),” the GET-down funk of “Love Me Inside Out,” and the LOW-down, boldly blunt, “I Wanna Sex You” (also available in a remix by producers Christian B and Marc Dold, and Boris & Beck, who’ve mined hits for Enya, Luther Vandross, Thalia, Pink, and Celine Dion). 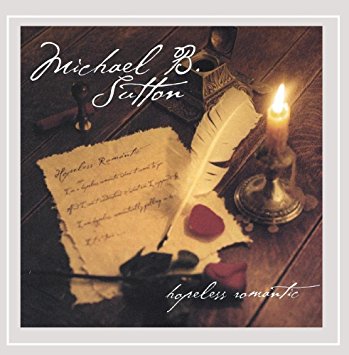 The final three songs of Hopeless Romantic comprise a relaxing home stretch that plays like a night cruise with the top down in tropical paradise. It begins with the Spanish tinged duet “Lovers Serenade,” on which Michael is joined by his former Motown label mate Tata Vega. Next up is “Nobody,” a steppers groove with a cha cha flair and a message every woman wants to hear. Finally, the ride arrives at its heavenly close with the title track, “Hopeless Romantic.”

Addressing the sensual elements of his album, soft-spoken yet philosophical Mr. Sutton explains, “Great sex stems from passion and the freedom to explore it. You have to feel good about it! Sexuality is a spiritual adventure. There was something opening up in me at the time that I wrote most of this material…a sense of freedom about who I am. These songs were born out of that liberation of expression.”

Michael Burnett Sutton was born in Oakland, California, the second child of be bop trumpet player Burnett Sutton and his lovely wife Lula Mae. It was Michael’s grandmother who steered him toward the Church of The Living God, where his high school buddy Ernie Jackson introduced him to the Hammond B3 organ. Soon, Michael was fellowshipping in musical ministries in Los Angeles. During a long drive back up Highway 99, Michael wrote his very first song to help him make it through the frightfully foggy night: “Jesus Will Give You The Victory.” At 17, Michael moved to L.A. for good, living with friends at first. When the lady of the house’s sister Brenda came to visit, Michael fell in love. They performed gospel together, eventually working with legendary James Cleveland and the Stan Lee Ensemble. Michael and Brenda married and added three children to the one she already had.

Struggling to make ends meet but happy to be doing music, the duo started performing hits of the day all over Los Angeles. Michael and Brenda caught the break of a lifetime at an audition for Stevie Wonder’s backing band Wonderlove. The superstar got so caught up in their performance that he hopped up on the piano and proceeded to teach them a song he’d just written titled “You Are My Heaven.” Though the song eventually went to Roberta Flack and Donny Hathaway, Stevie made a call to Motown and insisted the company look into signing them as artists.

From the mid-70s to the top of the80s, Michael and Brenda toiled at the company, less as artists, yet flourishing among Jobete Publishing’s most consistent writers. Everything was going well until one fateful evening while running an errand, Michael began to feel disoriented and dizzy. It happened several more times until Michael finally sought help. Ultimately, he was diagnosed with “limited agoraphobia.” This manifested in the form of anxiety attacks which eventually kept him from walking even half a block from his home. It was a harrowing period in Michael’s life – a time when there wasn’t much information about what was ailing him. While grappling with the process, Michael lost work opportunities and had to downsize his lifestyle.

Following a stint as members of the group Finished Touch, Mike and Brenda left Motown in 1980 and formed their still active publishing company Mibren Music. As a duo, they recorded both as Mike & Brenda Sutton and The Suttons, scoring several mid-charting R&B hits, including “Don’t Let Go of Me (Grip My Hips)” They also placed songs on albums by Dionne Warwick (“I Don’t Need Another Love”), Cheryl Lynn (“Shake It Up Tonight”) and Anita Pointer (“Overnight Success,” also covered by former Prince & The NPG member Rosie Gaines). Alone, Michael also wrote and arranged for several film and TV projects, including Isaac Hayes’ hip hop/gospel rendition of “Amazing Grace” from Guilty As Charged, plus songs for the score of Carl Franklin’s directorial debut, One False Move (starring Billy Bob Thornton and Cynda Williams).

A song Michael composed for HBO’s soft core erotica cable series Emmanuelle in Space (starring Baywatch babe Krista Allen) helped set his solo artistic direction into motion. “The producers needed a theme, so I sent in a demo intended for a woman to sing,” he shares. “The guy called me back and said he liked my voice, so I wound up singing it.” Later, Michael sent a fresh set of songs to his brother-in-law to use during his retirement party. He was promptly asked what it would take to get this great music out for the world to hear. With the assistance of his lady friend and business partner “Birdie,” Michael took the leap of faith to release his debut album Hopeless Romantic on their own charmingly named label, Little Dizzy Records (a reference to his condition as well as a nod to his trumpeter father).

Best of all, through Internet sales, club play and word of mouth, Michael B. Sutton’s Hopeless Romantic (liberally layered with butterscotch background vocals by his daughter Dionyza Sutton) is earning him fresh admirers daily, rendering them helpless in the face of his ever so persuasive ‘Oakland Stroke.’ One such person emoted in his Web site guestbook, “This CD has been like an unfolding story which I hope never ends…not unlike a wonderful book that’s last page you almost avoid.” With Sutton’s words alone being so striking, what ‘Sophisticated Juliet’ could resist?