1.How have things been going for you all lately?”

Thank you for having us! Things have been going fairly well overall. We’re actually in the studio right now recording our third record, which will be released in January 2020. We’ve also been playing several live shows in the L.A. area and working on a music video idea as well.

2. Tell us a little about the new record. How’s the recording process going?

We’re excited about this new release. This past year I wrote about 50 or 60 new songs in consideration for this record. Then, it was a matter of trying to pick the best 14 or so songs to actually record, and then from there, the best 12 or so will likely make the record. We have a good mix of fast, in-your-face, pop-punk type songs, along with a few upbeat summer jingles, and a few contemplative trance songs that really build into something that feels really good to listen to. It’s always been pretty easy for me to write slow and reflective songs, but I somewhat prefer to write fast, feel-good songs, because I like music that lifts you up and energizes you. Actually, I think there’s a way to do both. In fact, lately I’ve been writing a lot of songs that start off one way, and end up making you feel an entirely different way at the end. I really like that mix of different moods and feelings.

Our music is basically pop-rock in nature. However, I listen to a lot of pop-punk sounding bands too, from MXPX to Blink 182, Local H, Television, the Cars, and the Ramones, so that definitely has influenced parts of our sound. There’s nothing like a good fast-paced melodic song that feels amazing to listen to. And, that’s what we try to create with Dizzy Box Nine—memorable and melodic songs! But, we also try to have some level of depth and insight associated with our music. We want to challenge the listener to some extent, but we also strive to provide them with great sounding music. So we’re not just talking about themes of bubblegum and soda-pop or whatever. There has to be some level of depth to the music or the song just goes away. I also grew up listening to a lot of 80s and 90s rock, so bands such as Mötley Crüe, Nirvana, the Cure, Maná, the Gin Blossoms, and the Refreshments have also influenced our music.

My bandmates bring a lot to the table…. Every time we play a live show, it really seems somewhat magical at times.

Amos Przekaza is a tremendous drummer, and he has the chops and character to play for some of the top bands out there. He brings a lot to our music, and our audience members really appreciate him. After almost every show, three or four different people tell me how much they appreciate him being in the band. He’s a very likable person, and extremely talented. And then there’s Tony Robles on guitar. This guy can flat out play! Tony definitely brings a lot of 80’s rock stylistics to the mix—which I love. His soloing is top-notch, and he can just improvise just about anything—even with only seconds notice. I remember being at a show once, where we were playing a song in which I was supposed to do the solo, and then, like 7 seconds before the solo, I gave Tony a look indicating to him that he should just take the solo, and he just seamlessly blew it away. The crowd really responds to him. His favorite guitar player is Eddie Van Halen, and you get a sense of this every time he plays.

4. Is there any particular artist or band you would like to collaborate with in the future?

One band in particular that I would love to collaborate with would be MXPX. They really have a cool sound, and there’s a nice vibe about them. And, most of their lyrics are pretty positive in nature. To me, that’s important—you want to keep it positive on some level, even when things are hard, and life is challenging, I think it’s important to offer some sense of hope. They’re also a great live band. I’ve seen them play live a few times, and they really know how to put on a show!

5. What advice would you give to aspiring musicians?

I would say you have to keep working on your craft relentlessly, in spite of any negativity that is sure to come your way. You also have to have a reason to do what you do—a reason that transcends ideas of fortune and fame. It really does have to be about development and contribution. There has to be a reason that drives you, or burnout and stagnation are sure to arise. Most bands are not famous or economically set for life. And, even many very popular and successful bands end up having financial problems later in life if they are not careful. And, popularity definitely has its price.

Living like a rock star is a rather short-lived proposition, and may not be the most useful thing for any of us to do. Artists need to see who they really are, and cultivate that, and share that. This is all easier said than done of course, but it’s something to keep in mind. 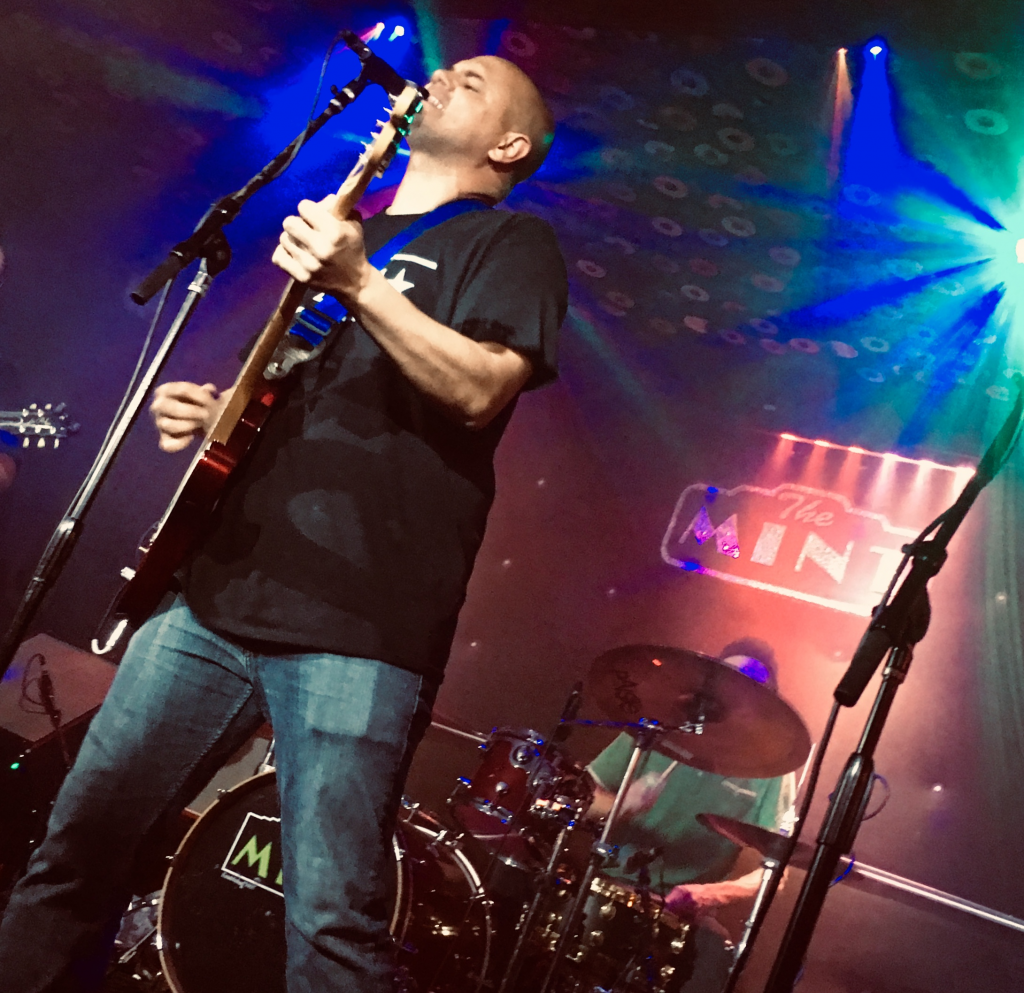 6. What’s next for you? Where do you see Dizzy Box Nine going in the next few years?

I’d like to help take this band to the next level. I think my bandmates are counting on me to do that, and I want to come through for them. Of course, we’d love to sell lots of records, and sell-out music venues, and do a regional tour, but truthfully, one of my main goals is to write the strongest songs I can in order to give the world a chance to meet Tony and Amos. These guys have sacrificed a lot for the good of the band, and they truly deserve to be heard. Of course, we’d also love to play the Tonight Show or Jimmy Kimmel or something like that, but, that is still a work in progress. Ultimately, if we can help to brighten up someone else’s day a touch, then we’re pretty happy with that.

7. If you had one message to give to your fans, what would it be?

I would say our songs and our live shows are ultimately about them, and for them. We strive to entertain, but we also strive to serve in some type of reflective capacity to allow our listeners to unwind a bit, relax, and re-evaluate where they are, who they are, and where they are going. If any of our songs can help do that for them, then we are humbled and extremely grateful. And, we truly appreciate everyone who has supported us, because they are allowing us to have the chance to support them back!

Thank you Pump it Up Magazine for giving us this opportunity! And, thank you to all those who were able to read this article and listen to our music.

The Grammys 2018 in New York | Full list of nominees

28 November 2017 Pump It Up Magazine MUSIC GENRES, NEWS, Travel Comments Off on The Grammys 2018 in New York | Full list of nominees

1) What’s your favorite part of the music creation process? And what do you think is the most stressful? With composition, I love when I discover the idea and the melody comes… I record it […]

Every Month, PUMP IT UP MAGAZINE publishes a chart listing of indie music artists based on their cumulative chart performance in the World [bmc id=3]