News Ticker
Cardi B‘s Sunday night outing at the 2018 iHeartRadio Music Awards was full of highlights. Not only did she announced that her debut album will drop in April, as per her Best New Artist award speech, but she also celebrated her meteoric rise in 2017. At the top of the show, Bardi stormed The Forum stage in a spiked biker top with a matching black tutu dress to kick off the DJ Khaled and Hailey Baldwin-hosted ceremony. With a crew of dancers and accompanying motorcycles, the breakthrough star performed a medley of her hits, including “Bartier Cartier,” “Motorsport,” “Finesse,” “No Limit,” and, of course, “Bodak Yellow.”
by Taylor Fields and Hayden Brooks 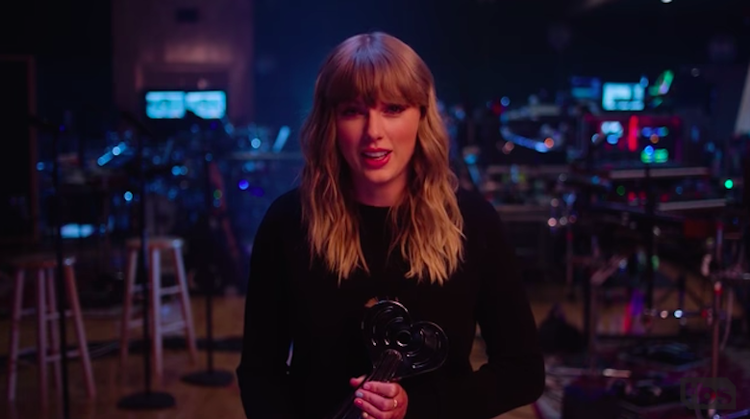 Swifties! We have a brand new music video! Taylor Swift debuted her new music video for her latest reputation single “Delicate,” and it is the video Swifties have been waiting for, as it is reminiscent of old Taylor. Guess the old Taylor can come to the phone now?

Taylor premiered the new visual just after she received the iHeartRadio Music Award for Female Artist of the Year, a category she was nominated in alongside Rihanna, P!NK, Halsey, and Alessia Cara. “I just wanted to say thank you so much for this award. And to the fans that you have done and always continue to do, you’re the best,” she said. “I cannot wait to see you on tour, I’m actually in rehearsals right now, and that’s why I’m not there. But in my absence, and to show my gratitude, I really wanted to show you my brand new video for my new single ‘Delicate.’ This video I’m so excited about and I hope you like it too.” 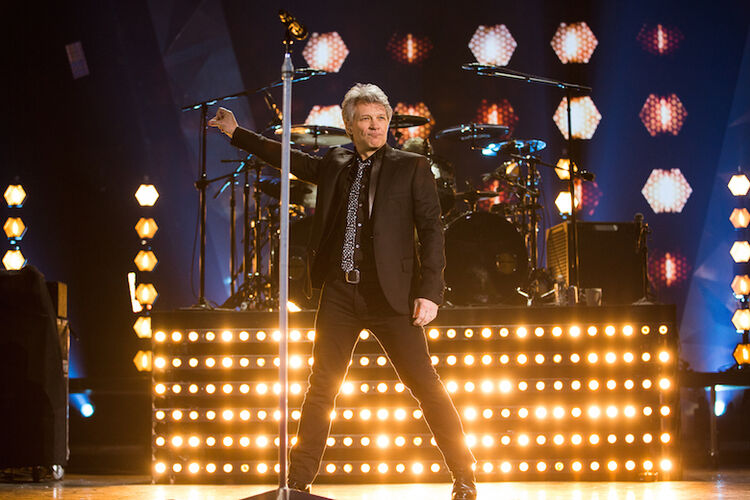 Over the last 35 years, Bon Jovi has cemented their status as rock & roll icons, releasing chart-topping hit after chart-topping hit, not to mention all of their sold-out tours. They are being inducted into the Rock & Roll Hall of Fame next month, but the legendary rock band was honored with the first-ever Icon Award during our Sunday night ceremony.

After introductions by Olympic snowboarder Shaun White, who spoke about the legendary rock band’s success, Bon Jovi appeared on stage again to accept the title. Jon Bon Jovi thanked the band’s fans for listening to their music over the last 35 years, and gave some advice to all of the new talent in the room. He said: “I wanna thank the three and a half decades of fans that have been listening to Bon Jovi songs. We’ve been at this game a long time, and the only advice I’ll tell this incredible generation of incredible talent is just stay true to who you are, and then they’re going to make you guys icons too some day.” 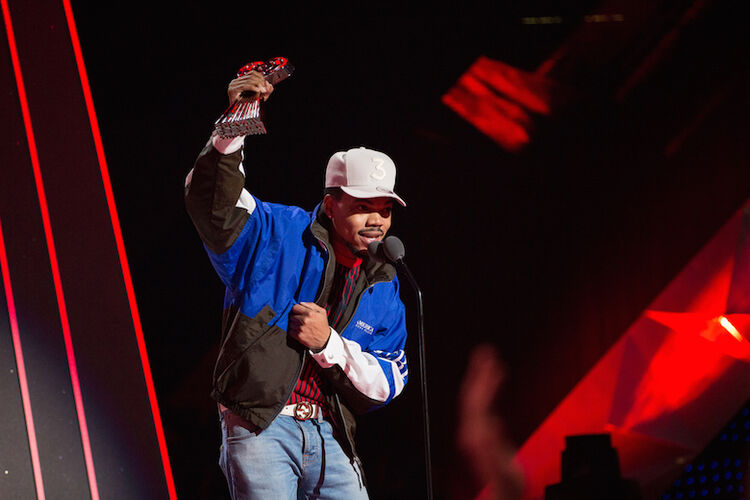 Chance the Rapper is the newest recipient of the Innovator Award during this year’s show. At just 24-years-old, Chance joins previous Innovator Award winners Pharrell Williams, Justin Timberlake, U2, and Bruno Mars.

Three-time Grammy winner (and seven-time nominee) Chance the Rapper is recognized for his groundbreaking accomplishments in music and undeniable contributions to social causes. As an independent artist, he has risen to the top of hip-hop superstardom and uses his voice to fight for youth empowerment through the arts, and education through his non-profit organization, SocialWorks.

In his acceptance speech, Chance started out by thanking Pharrell, and spoke about the positive influence that he’s had on his life. He explained, “Thank you, first of all. And real quick, since nothing is scripted up here, thank you Pharrell for number one being just a positive, I say that with as much impact as I can, a positive influence in my life since I was young. But also, for giving me the confidence, because I don’t know if you remember this a long time ago we were at a studio, and I was telling you, I think I need to sell this third mixtape, so I can get my nominations at the Grammys and blah, blah, blah. And you were like, ‘No, you don’t gotta do that.’ And just with small passing things that you say, I don’t know if you know how much weight it carries on people, but thank you.”

Just as we reported, Camila Cabello’s celebratory showing on Sunday night was further proof of her solo pop superstar pursuits. Not only did she blaze the stage with a Madonna-esque performance of her breakthrough smash, “Havana,” but the former Fifth Harmony singer was awarded the first-ever iHeartRadio Fangirls Award presented by L’Oreal Paris for her ability to push beyond her naysayers and break boundaries.

Dressed in a much more subtle outfit than her gleaming pink performance dress, Cabello took the stage to accept the award and offer up a passionate speech about inspiration and remaining optimistic to pursue your dreams. “I wanna thank L’Oreal and I wanna thank iHeart for giving me this award. I fully believe in what it stands for and taking risks and pushing boundaries. Oh my God. I love you so much,” she said.

o anything that you set your mind to,” Cabello continued. 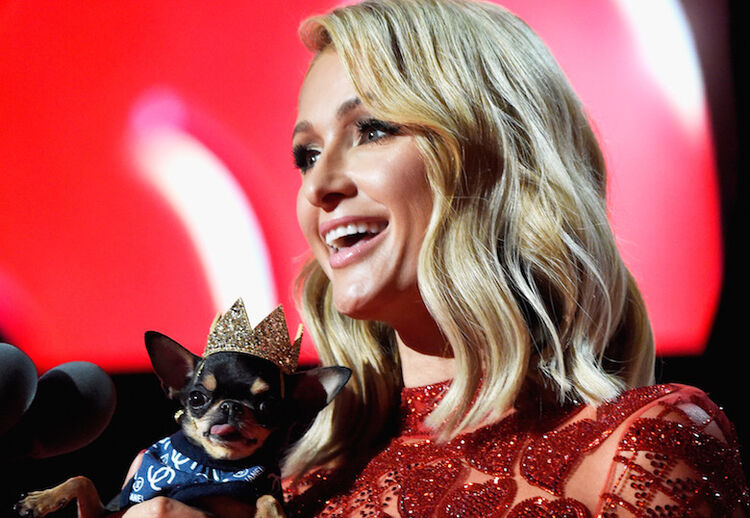 Sometimes, the best part of scrolling through your favorite artists Instagram page is seeing their adorable pets. They continue to bless our feeds ever day. That’s why iHeartRadio was honoring the cute and furry this year in the Musician’s Cutest Pet category, which was fan-voted.

And who better to present the award for Musician’s Cutest pet than Paris Hilton?! You know, the star who “invented having a celebrity pet.”

And the winner? Why, “one of Diamond Baby’s besties” of course! Ariana Grande’s Toulouse. Grande and Toulous were not there to accept in person, so the cute pup sent in an acceptance video to say thank you. 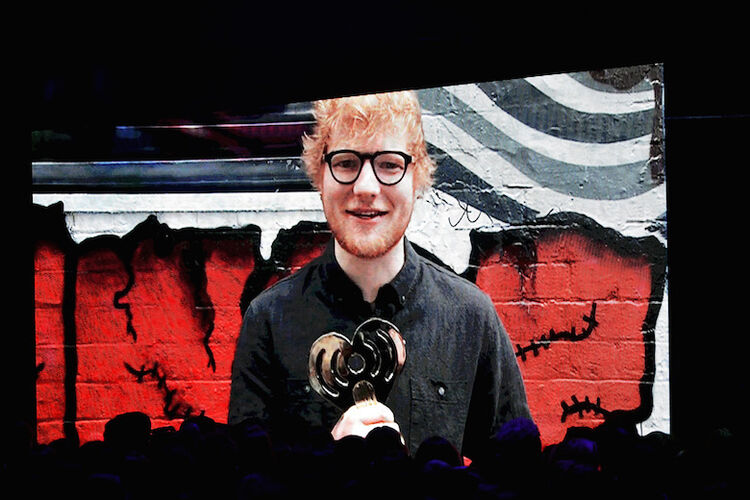 Ed took home the award for Song of the Year, for his hit single “Shape of You.” The song was nominated alongside Luis Fonsi & Daddy Yankee’s “Despacito” featuring Justin Bieber, The Chainsmokers & Coldplay’s “Something Just Like This,” Bruno Mars’s “That’s What I like,” and DJ Khaled’s “Wild Thoughts” featuring Rihanna and Bryson Tiller.

Ed accepted his iHeartRadio Music Award from Melbourne, Australia where he was on tour. Via satellite, Ed said in his acceptance speech: “Sorry, I can’t be there, I’m in Melbourne at the moment, it is 10:15 in the morning and I am accepting this award. Thank you so much to all the programmers at iHeart, all the radio DJs, and all the fans. And they’ve set up so I can play, so I’m gonna play if that’s alright.”

Then, he picked up his guitar, walked into the middle of a crowded street full of fans, and performed his current single, the wedding song of the year, “Perfect.” Fans gathered all around him swayed back and forth and sang along with Sheeran as he performed in the unique location. 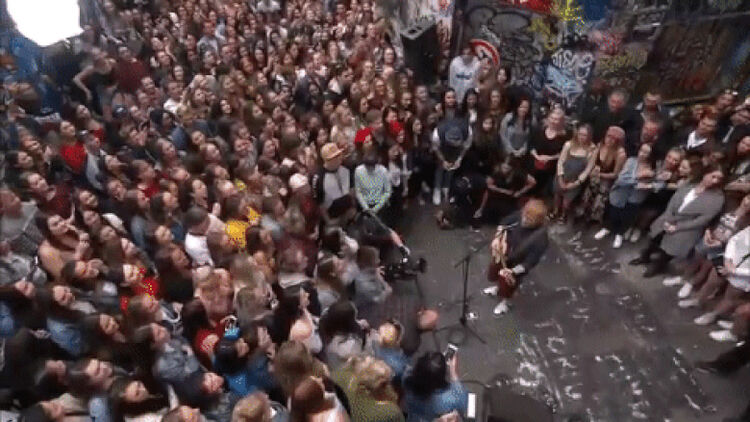 Hailey Baldwin kicked off her co-host duties at the show at The Forum in Los Angeles by paying tribute to the victims of the Marjory Stoneman Douglas High School shooting in Parkland, Florida.  The model wore a black T-shirt that read “Stoneman Douglas High” with a pair of sequined palazzo pants and an equally sparkly double buckle belt.

As previously reported, seventeen people were killed and numerous others were wounded after 19-year-old Nikolas Jacob Cruz went on a shooting rampage at the high school. Cruz is being held without bond after being indicted on charges of premeditated murder and attempted murder.

N.E.R.D’s ‘Lemon’ Set Was Anything But Bitter 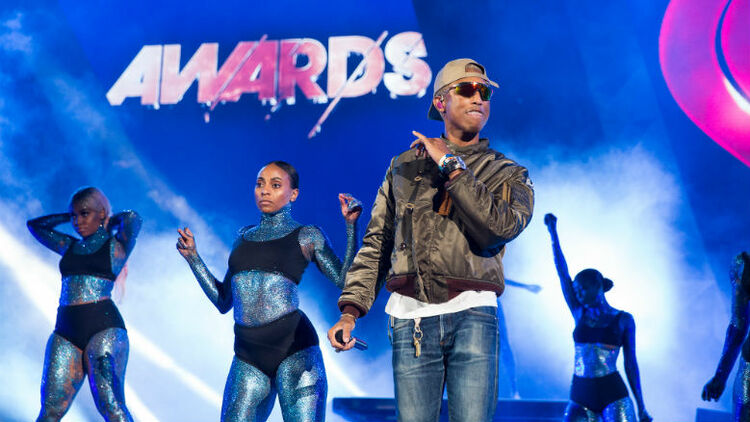 After show-stopping numbers from Cardi B and Camila Cabello, N.E.R.D closed out our 2018 iHeartRadio Music Awards on a high note on Sunday with a performance of “Lemon,” which was accompanied by Mette Towley, the star of the music video who got her head shaved by Rihanna.

For the closing ceremony number, which was presented by host Hailey Baldwin, Skateboard P was joined on stage by Towley, a batch of dancers and his N.E.R.D mate Shay Hayley. If you thought that the eye-popping aesthetics from Bardi’s performance couldn’t be rivaled, then the “Lemon” set proved otherwise. Pharrell kept the energy high with his flow. Dancers poured onto the stage in sparkling bodysuits and, boy, did they keep the booty-popping action at a maximum. Plus, the purple explosion of lights provided viewers with one visual feast.