Mystery is a slippery entity…sometimes an asset, sometimes a deficit…straddling realms of the known and unknown…the way a man may be perceived vs. who really he is: in reality…and his funky-funky imagination.

In the case of Byron Miller, mystery has been a double-edged lightsaber.

It has been an asset in the way his music commences asses to wiggle thus gaining him a beautiful and bootiful fan bass of “ass-ettes.” Mystery has allowed Brother Byron to concentrate on his work, legacy and creativity without the pressures of having to be “on” at all times. His “on-switch” is saved for the stage where he bumps it up full blast, bobba…with swift, nimble and emphatic bass thumpins and rumblins…notations that speak a singular language all his own yet can be fully understood by all. 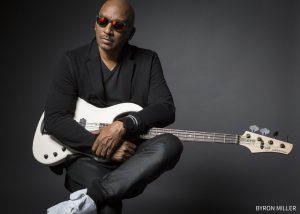 Yet, mystery has been a deficit, too, because it has robbed the world of a Byron Miller catalog that could easily have been 20 albums deep by now.

However, by Byron’s own deeply confessional admission, he simply was not ready to take that step. Though he has released three little known previous CDs to date, the one you are holding in your hands truly marks “The Rebirth of Byron” – literally and figuratively – via his alter ego: “Psycho Bass.” Throw away your thesaurus, dictionary and preconceived calculations. Byron Miller – the man who gave Funk one of its most “Funk-da-Mental” bass solos on George Duke’s concert-christened “Reach For It” – steps from the shadows and evil broadcast radio edicts to speak freely and truthfully with every inspired pluck and run.

Whether you crave Bass on Top, Bass on Bottom, Bass in your Face or Bass from Outta Space – Psycho Bass has it call covered…and, “UH,” it’s about time, bobba. PLAY! A. Scott Galloway Captain’s Starlog: 18 April 2015 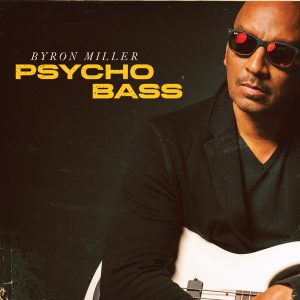 On his latest solo outing, veteran groove great Byron Miller—perhaps best known for his “Reach for It” solo with George Duke reinvents himself as the Bootsy-esque character Psycho Bass. Introducing himself (and establishing the formidable funk formula that lies ahead) on the opening title track, Miller blows on his effect-juiced signature MTD with bluesy ease and abandon. His high-flying lead bass prowess continues on “Psycho Management” (with its Marcus Miller-minded harmonies), a sweet cover of Blu Cantrell’s “U Must Be Crazy,” and Duke’s “Oh, Really” (one of three tracks Duke appears on). Miller also mans an acoustic bass guitar to “sing” the underrated Al Jarreau gem “Heart’s Horizon.” On the support side, Miller muscles the fusion-y blues of “Psycho Jazz Dance” and an inventive, straight-feel take on Steve Wonder’s “Higher Ground,” with Ellis Hall on vocals. 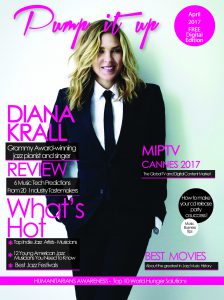 Randy Hall has been a professional guitarist, vocalist, composer, arranger and performer since the age of just fifteen. Over the course of over four decades he’s wowed millions worldwide, topped charts and worked alongside iconic […]

After receiving public credit for her futuristic vocals on her “Good Vibez” single released back in February, Filipina American singer-songwriter HEIDI TANN is back in a more funky version featuring Bruno Nesci on the “Good […]

Chromeo have released “Juice,” a new song that features the hook “You got the juice / That’s why I keep pressin’ ya.” The track is the first single off their recently announced album Head over Heels. The […]