Hi Readers, we were fortunate to be able to sit down with Andrew Bailey recently for an interview, a top music executive and DJ for many years and this what happened

1)Tell us what motivated you to get into the music business, how old and where were you?

AB: I started DJ’ing for school parties aged 11 in 1974 and was fascinated with the radio as a source of musical inspiration. Back in the 1970’s pre-MTV and with little “pop” music on TV, in the UK BBC Radio 1 and Radio Luxembourg were the key stations. As time went on and in around 1975/76 when I discovered Soul, Funk and Disco via the few specialist radio shows on UK radio I realised that “Pop” was not for me!

I didn’t join the business full time until 1988 when I was a partner in two retail record shops in London..yes vinyl only back then!

The DJ’ing was pretty full on until 2002 then my life in the music business became so hectic I stopped, until recently when as a result of moving to Ibiza in 2008 I started playing a few gigs in 2014 onwards at Pikes for Car Wash Ibiza, and Space for Reach Up! as part of Carl Cox’s – Music is Revolution parties which ended this year L.

2)What music influences can you write to as you have became more successful in the business?

AB: Business wise – my partners -Ellis Rich at Supreme Songs (we’ve been in business since 1990!) and one of my partners at Performance Rights  – Richie Malone (we’ve been working together for more or less the same amount of time) . It’s quite rare for partnerships in the Music Business to last so long so something works! LOL

Musicwise… Disco is my first love, followed by House, Soul, Funk and Jazz.. I love the “re-edit” scene that has happened around the new technology used for making productions – Ableton etc.. So many great new versions of tracks I used to play back in the day (some really bad ones as well.. but you have to spend time searching!)

3)We noticed you are involved in at least two powerful companies, tell us a little about each other?

www.supremesongs.net – an independent Music Publisher since 1986!

www.performancerights.com – an agent for Neighbouring Rights , formed in 2015

Across the three companies we probably have around 800/900 clients so super busy!

4)Where do you see the music industry gain as a writer in the next 5 years, and do you have any specific artist productions?

AB: My main business life in 2016 involves rights management and getting the talent paid, so they make the music and we find the money! Hopefully that will be the template for the future too !! JJ 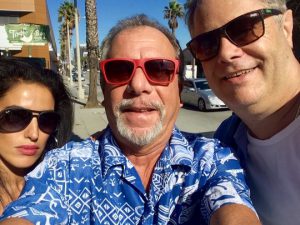 Walter Hansen is a singer songwriter, producer, and recording artist. He is also a multi-instrumentalist, his specialties are saxophone, flute, keyboards, and accordion 1) Great to have you on Pump it up Magazine. Please, introduce […]

Interview With Bernie From The Jazz Band DRIVETIME

14 May 2018 Pump It Up Magazine INDIE ARTISTS, INTERVIEWS, NEWS Comments Off on Interview With Bernie From The Jazz Band DRIVETIME