The 22nd edition of WOMEX will take place in Santiago de Compostela, Galicia, Spain, from Wednesday, 19 to Sunday, 23 October 2016.

We and many delegates we talk to aim to strengthen the role of culture in this debate and see their work in an even broader context than the refugee debate suggests. The world music community is able to – and needs to – contribute to cross-cultural understanding. We hope, and in fact we are sure about it, that you are in it with us, by hosting, participating in and promoting the WOMEX community and spreading its values through art.

For more information about WOMEX’s commitment to diversity and against xenophobia of all forms, please see our International Press Statement.

The WOMEX Photographers are:

“Bringing together professionals from the worlds of folk, roots and traditional music and more in an extraordinary five-day event, WOMEX remains a key highlight on the global music scene.”
IMEXSA Independent Music Exporters South Africa.

“One of the highlights of the annual WOMEX conference (besides the discovery of awesome music!) is that it is truly a gathering of the tribes – devoted, passionate cultural entrepreneurs and international music lovers from all over the world who provide continuous inspiration for the following year until we meet again!”
Catalina Maria Johnson (USA), Radio Host/Producer and Music Journalist, Beat Latino

“I visit quite a few showcase events and conferences every year and WOMEX is always the highlight. There’s always a lot of good music and some great music, but even more than that, the spirit of WOMEX is music and enjoyment first, business second, which means, rather than dog eat dog just under the surface, there’s a sense of a bunch of very different people who form a floating collegiate.”
Nick Hobbs (UK/Turkey), Charmworks 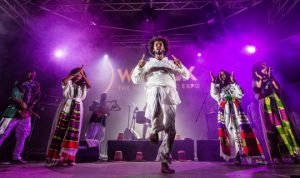