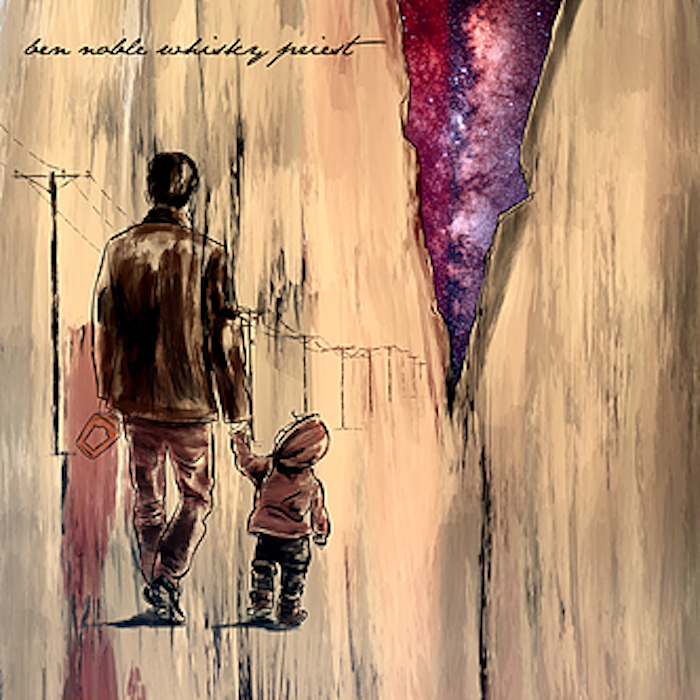 The new album Whiskey Priest by Ben Noble was apparently recorded in a cabin. However, I get the feeling this album was not recorded on a laptop with a two hundred dollar interface. The whole album is extremely polished and is filled with instrumentation like guitar, viola, cello, drums and more.

I never heard of Ben Noble prior to hearing Whiskey Priest and it was one of those albums where I wasn’t expecting to be as moved as I was. His music at its core revolves around beautiful guitar playing and vocals. Those two elements are so good throughout it could be nothing besides that and I would have still loved it. The thing that really pushed this album beyond just another singer/songwriter is the way he weaves the additional instrumentation which make it feel more than just additional layers.

The most obvious comparison would be Bon Iver. There is a soft, intimate yet ethereal quality to Whiskey Priest that makes it feel relatable and personal while still feeling grand and other worldly.

It didn’t take me long to appreciate the talent Noble has to offer. I was drawn in by the delicate vocals and haunting, melancholy strings on “Birthmark.” The percussion can easily be overlooked but is brilliant in its own right as it hits on the off beat. Vocal harmonies seamlessly blend with the string creating an emotionally powerful moment.

“Healer Might” is an a cappella gospel performance which is beautiful and doesn’t overstay its welcome. The warmth and beauty of “Daughter” is immediately evident but it was “Little One” which really got my attention because of the unique structure and balance between intimacy and borderline euphoric blend of instrumentation.

“Cutting Teeth” is another gorgeous song while “Whirlwind” is the first song that introduces unique rhythms and percussive elements. “Whirlwind” is really the peak as far as the energy levels go. I have to admit I wanted one more song like that towards the second half of the album that had similar percussion and rhythm to balance out the almost dizzying amount of emotion.

It’s still early in the year but I can say this will be one of the best releases of the year. Highly recommended.