Each time I think of Aretha, my mind goes back to 1967. I was a teenager dancing away to RESPECT in my hot pink plastic dress and white go-go boots. Like the other girls at that party, my hair was styled with the help of a waist long pony-tail and my eyes were heavily outlined with two pairs of false eyelashes I hoped would hold up until I got home. WCHB radio in Detroit was our local soul station and you could count on them for all the latest tunes right out of Motown, Gordy, Tamla, Arista, RCA and other labels featuring soulful artists. The Black is Beautiful movement was taking hold, which points to the success of Aretha’s hit tune “RESPECT.” 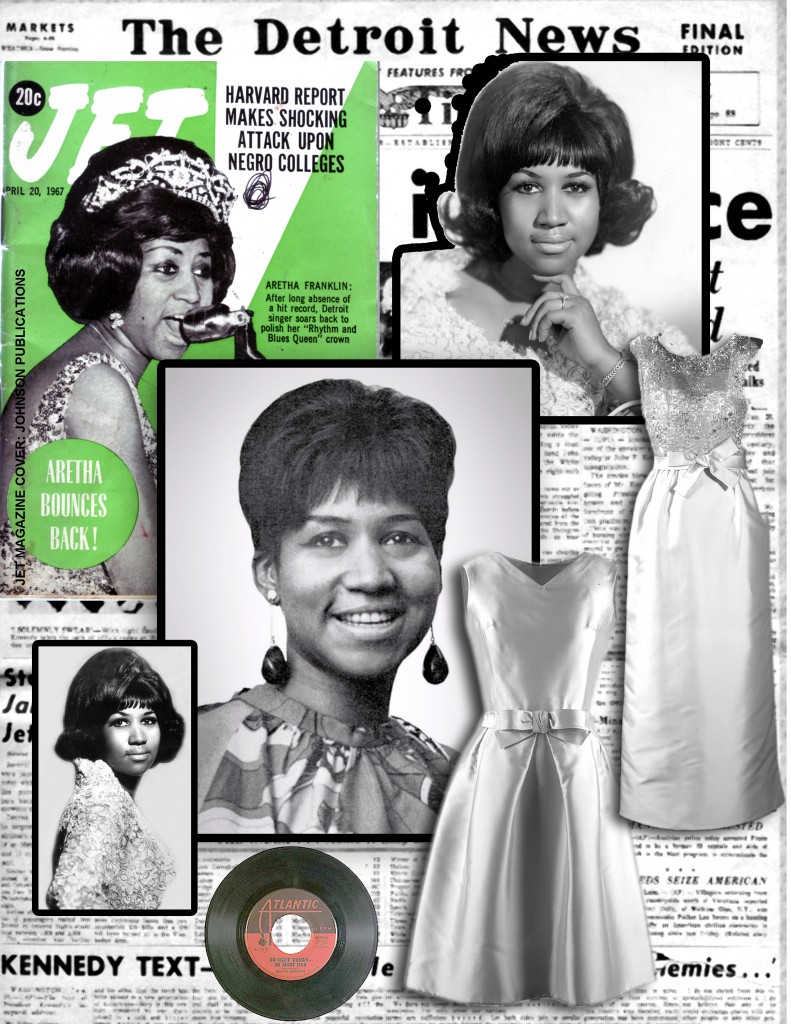 By the time RESPECT hit the airwaves, America was in the midst of the biggest cultural and social revolution in history. The Civil Rights Movement was in full swing forcing the country to come to terms with equality of the races. In a backlash to the burgeoning Vietnam conflict, anti-war demonstrators questioned the role the US was playing in the geopolitical landscape. The “Swinging 60’s kicked off by America’s youthful first family seemed to serve as a catalyst for the “Baby Boom” generation to step up and take its place in history. With the 16-25 year old now the center of attention, everything changed from sexual mores and the arts to television and fashion of the times.

At the decade’s beginning, Paris dictated the last word on style and Jackie Kennedy, the half French, half American spouse of JFK, was its chief ambassador. This was the era of haute couture and custom fitted dresses , skirts plumped up with petticoats, and bead-encrusted evening gowns. Fashion was regal, fit for princesses and queens….and those of us who just wanted to dress like royalty. In one of her earliest public appearances, Aretha, was photographed in a lace sheath dresses and high heel shoes, hair coiffed in the most glamorous style of the decade, the “flip” (slightly bouffant hairdos with bangs and curled upwards at the ends.)  After all, many in the music industry expected Aretha to take over the title of “queen” after the untimely passing of Dinah Washington (39). It was befitting that she should dress the part.

By the mid-1960s, teenagers were on an “anti-establishment” path. In France a 20-something Bridget Bardot declared “high fashion was for old fuddy-duddies.” In London, four mop-head guys who needed haircuts, ushered in a new look and a new sound echoing from across the pond. Young people everywhere began challenging all aspects of authority, aesthetics, culture and lifestyles. Fortunately for us, Aretha and her soulful voice, was there to sing us through it all.

Nation-wide, African American teenagers rocked to the beat of Berry Gordy’s “Motown Sound” while on the other side of town,  The Beatles upstaged Frank Sinatra and Elvis Presley  with their exotic  Cockney twang  and a look they called, MOD. Well coiffed beehives fell flat in the face of long super straight “Ironed” hair or choppy little pixie cuts which, at any moment, could be transformed into supersized ‘dos with wigs, hairpieces or “falls. White and Black women both embraced this look, though by the decade’s end,  hot combs would be replaced by Afro “picks “as Black women (and men) opted for halos of natural hair. Aretha was one of the first stars to adopt this Afro centric style and use her celebrity platform for the benefit of the Black movement.

In the meantime, Frenchman, Andre Courrege’s introduced over-the-knee hemlines in his high fashion line. It proved o be a kicky short look that was well received by the world’s youth. On the other side of the channel, British designer, Mary Quant was also creating leggy fashion and she called it “the mini.” Quant crafted a new “Carnaby Street” look where waists were lost under straight “shift” dresses or raised into empire waist “baby-dolls.” There were mini-suits, where cute, boxy jackets, borrowed from menswear were teamed with A-line or box pleated skirts, stove pipes or bell bottom pants. Natural fabrics were out. Shiny vinyl, paper, and even metal or plastic discs soldered together delivered the look all cool girls wanted.  Jewelry was big, bold, geometric and super cool. Everybody traded in their high heel shoes for square toed flats, knee highs and go-go boots, all of which worn over patterned, fishnet or windowpane tights.

Even makeup was fun, not sensible. Faces were used as palettes to create heavy handed eye makeup works of art. Shiny eyeliner alternating with white liner, masses of false eyelashes known as “Twiggy lashes” (after the 60’s top model) and tons of mascara took about an hour to prepare! Everyone wanted the “top model” look. That meant using sculpting sticks in different tones of flesh to carve out non-existing cheekbones and blush for that “natural” glow. Pearly pastel tones on the lips and nails polished off this facial masterpiece!

Movements in art and science were also reflected in our wardrobes. At a time when America engaged itself in a race for space with the Russians, the notion of intergalactic travel inspired artists and designers. There was of course, Andy Warhol who painting soup cans and litho prints of celebrities onto canvasses. These were widely copied onto edgy mini dresses made of paper. Yves St. Laurent fell in love with a color blocked Mondrian painting and translated it into high fashion frocks.  As man placed his first foot on the moon, op-art was born. These optical illusion graphics, inspired by imaginary walks in space leaped from the gallery and into fashion statements via over-sized earrings, chunky bangles or stacks of thin bracelets jingling up and down bare arms. 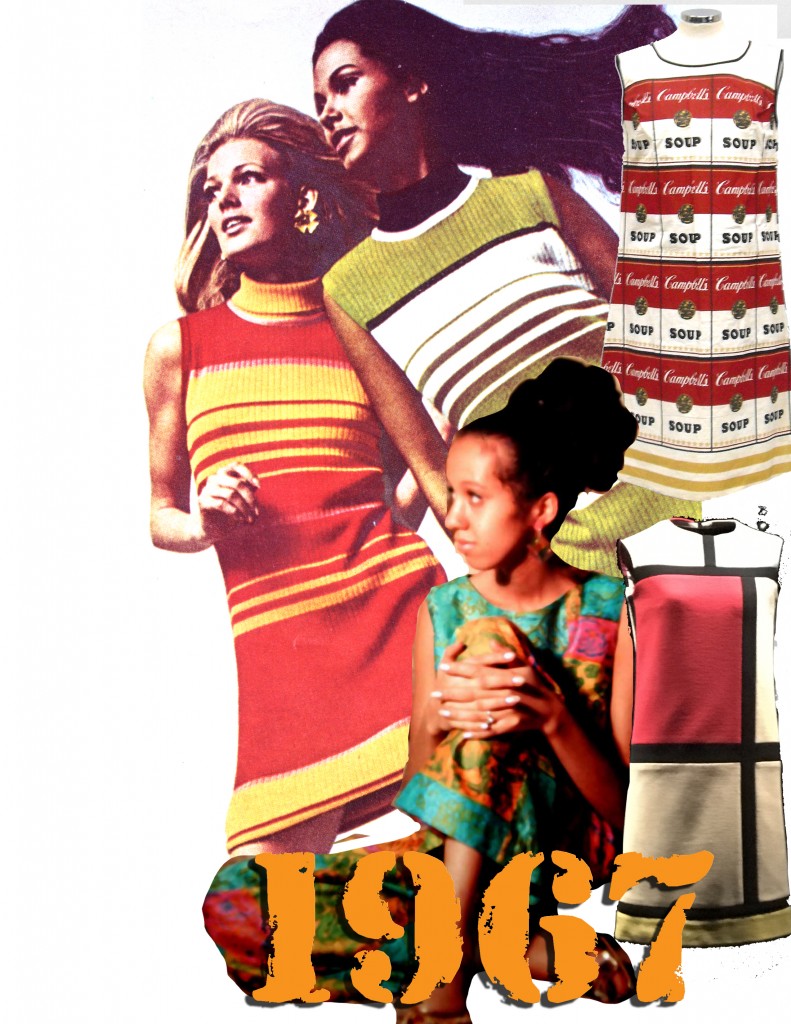 While Aretha Franklin was not a style setter per se, she wore fashion on her own terms.  The Queen of soul, whose career was born out of church, brought Sunday-go-to-meeting-clothes onto the concert stage way back in the early 1960’s. Those holy temples were not only sanctuaries for prayer but also settings allowing the congregation to tastefully show off hats in full plume, suits in bonbon colors and furs galore. Black women in particular, are known for using fashion to flaunt their status and success, whether real or imagined, be it past, present or perceived near future.

In the years after, we watched Aretha move elegantly from chic little sheaths to spectacular gowns and her signature “fur-drop.” Everything was tied to her success and self-worth. Even her battle with weight did not slow her down. She used it demand more high fashion options in the marketplace for larger, curvier women like herself.  Even in death the Queen of Soul continued use fashion to make headlines. No one will ever forget her bright red dress and Louboutin heels as her body lied in repose, nor her daily wardrobe changes right up until her burial day. What a creative (and unexpected) send off by an artist born out of the most prolific era in style.

During the public visitation for Aretha Franklin in August, the Charles H. Wright Museum of African American History made a quiet announcement. An exhibition entitled “Think” will open on September 21 and run through January 21. In a tribute to the Queen of Soul,  the Wright Museum will feature photographs. wardrobe and various personal items belonging to Franklin, set within the context of her iconic career. “Our goal is to showcase Aretha Franklin as the legendary singer and fashion icon she was, as well as to spotlight her impact as an activist for civil rights,” explained Delisha Upshaw, director of marketing and communications for the Museum. The exhibition is being put together in close cooperation with Franklin’s family as an homage to the legendary singer who passed away on August 16. The Museum’s exhibition space was closed while Aretha’s body lied in state. By hosting “Think,” Upshaw feels this will give a reason for fans to return and take a more up close and personal look at the meteoric rise of Franklin’s career.