Despite looking back to the 1970s battle over the Equal Rights Amendment, “Mrs. America” is as fresh and urgent as the half-century of political jockeying that has unfolded since those events. Cate Blanchett heads a sensational cast as conservative activist Phyllis Schlafly, in a limited series — premiering on Hulu, but produced sibling network FX — that’s among the very best of both.

The closest comparison, perhaps, would be “Feud,” to the extent the project focuses on warring female leads during an enticing historical era. The cast of characters, however, is significantly broader, with each of the major figures taking turns serving as the focus over the course of nine episodes.
On one side, there’s Schlafly, an expert on Cold War-era strategic concerns regarding the Soviet Union who essentially stumbles into becoming the face of opposition to women’s lib as a branding exercise, labeling it “a threat to the traditional American family.”

The irony is that the mother of six, who professes to defer to her attorney husband, Fred (“Mad Men’s” John Slattery), not only has a full-time job but is easily the higher-profile partner in this power couple.
Arrayed on the other side are the leaders of the equal-rights crusade, each of whom brings their own priorities to the cause, which serves as a source of friction. As a consequence, “Mrs. America” encompasses not only equal rights but race, abortion and gay rights, with activists such as author Betty Friedan (Tracey Ullman) insisting that standing up for lesbians will only dilute the message. “It’s not our fight,” she maintains.
Friedan clashes with some of the other big personalities involved, including magazine founder Gloria Steinem (Rose Byrne), the colorful Bella Abzug (Margo Martindale, in a part she was seemingly born to play) and Shirley Chisholm (Uzo Aduba of “Orange is the New Black”), the trailblazing African-American congresswomen who mounted a 1972 presidential run. 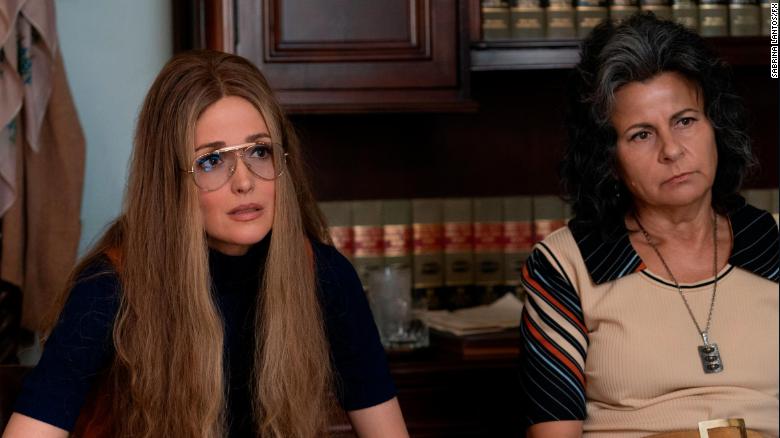 Rose Byrne as Gloria Steinem, Tracey Ullman as Betty Friedan in ‘Mrs. America’ (Sabrina Lantos/FX)
For her part, Schlafly wrestles with trying to keep her organization separate from those parts of the right aligned with racism and extremism, a distinction that become increasingly difficult to maintain. Her allies include a composite character played by Sarah Paulson, whose prominence alongside the real-life figures is one of the few faulty notes in this otherwise splendid effort.
Produced by Dahvi Waller (another “Mad Men” veteran, appropriately), with “Captain Marvel” team Anna Boden and Ryan Fleck directing four of the nine episodes, “Mrs. America” brilliantly replicates the period, from the styles and casual sexism on display to the seemingly unlimited song budget. Steinem’s looks are frequently mentioned (she’s referred to as “Glinda,” from “The Wizard of Oz,” versus Friedan’s Wicked Witch), and at one point a financial benefactor casually talks about her great legs.
In the process, the miniseries captures the chess match among the combatants, and the ups, downs and indignities associated with being a woman in the public square — especially then, but in ways sadly relevant to anyone with a Twitter account.
“No one likes feminists,” Fred Schlafly says, sounding as if he’s channeling Rush Limbaugh. “Not even liberals.”
The structure turns the narrative into an ensemble piece, but Blanchett is pretty astounding as Schlafly, including a televised debate she attempts to bluster her way through by making up a Supreme Court case, only to be called out on the lie. It’s a particularly bracing moment considering the prevalence of such tactics now, even in this age of ubiquitous fact checkers.
Although the narrative essentially ends along with the ’70s — “I believe Reagan is our Moses,” Schlafly says at one point — as the closing script makes clear, the ERA fight has continued into the present.
While the title plays off patriotism and beauty pageants, as quality TV goes, “Mrs. America” earns a different kind of crown. And whenever the TV awards business gets back on its feet, that might yield some hardware as accessories to go with it.
“Mrs. America” premieres April 15 on Hulu.
source: CNN
About Pump It Up Magazine 1647 Articles
Music | Movie | Fashion | Beauty | Fitness | Wellness | Books | Food | Travel & Events | Real Estates | Humanitarian Awareness Magazine based in Los Angeles California Reach for the stars while standing on earth! Pump It Up Magazine is the L.A. colorful, inspiring and vibrant print and online magazine founded by Anissa Boudjaoui-Sutton, showcasing dynamic up-and-coming talent and top tips from around the globe!
Website Facebook Instagram Twitter YouTube

Sly Stone in Summer of Soul, LeBron James in Space Jam: A New Legacy, and Dev Patel in The Green Knight — all movies hitting the big screen this summer. Searchlight Pictures/Hulu; Warner Bros.; A24 Though plenty of movies came out […]

Greetings everyone, It’s a hot hot summer and we hope you’re staying cool. This issue will debut our Teen edition which is focused on our youth and teens. On the cover this month is teen […]

Joaquin Phoenix plays Jesus in a new film. Here’s one thing he refused to do.