The unpleasant drugs profiteers has offered the rapper $10 million

Martin Shkreli first became “famous” when his pharmaceutical company bought the drug Daraprim – which is used for treatment and prevention of malaria as well as to treat people who are HIV positive – and then raised the price from $13.50 a tablet to $750 a tablet. 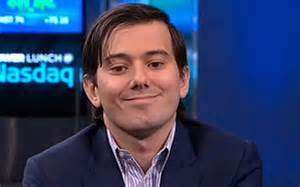 A joyless, attention-seeking, human being is attempting to buy Kanye West’s new album for $10 million solely so no-one else gets to hear it.

He next weaseled his way into the spotlight by buying the one and only copy of Wu-Tang Clan’s album Once Upon A Time In Shaolin, and releasing an embarrassing diss track aimed at the band.

Now, as the public release of Kanye West’s new album, The Life Of Pablo, approaches, Shkreli has offered to buy it for $10 million. He insists that the label are “legally required” to take his letter to their Board of Directors, adding gleefully that “this should delay the album for a few days.” 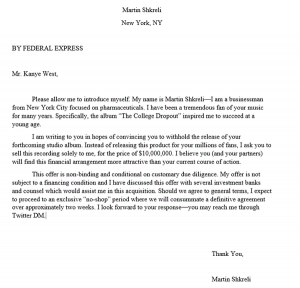