Dillon Ryan – a published author, writer, songwriter and aspiring filmaker
Posted By: Rick JammPosted date: March 08, 2015in: Featured Artists, Indie MusicNo Comments
Dillon Ryan is a published author, writer, and songwriter who has been building her catalog for years with the intentions to one day write songs for the voices that she loves. However, in July of 2014, Black Bullet Productions released her debut CD, Dillon Ryan – That Monster: Chapter III. This CD is an autobiographical and lyrical story, telling the artist’s journey transitioning to adulthood. It deals with the death of a parent, losing love, and losing and then finding herself along the way. It is available on ITunes, CD-baby, as well as her own website – DillonRyan.com.

Her skill is absolutely apparent in her original and thought provoking lyrics and storytelling. Her Facebook following has grown thousands in just a short time, most because of her ability to connect with her audience through emotion. On her sites, you will find not only her songs and CD, but short stories, poems, and other different artistic creations from her portfolio.

She has now begun a new endeavor and is designing her own products out of characters, lyrics, and inspiration from all of her writings and songs. Dillon says she began this because she used to make her own jewelry and then began receiving requests for pieces.

She is doing this mainly to raise money for a project she is working on for her Digital Cinematography Degree in order to graduate. Dillon Ryan has also written a film and wants to produce it, and did not feel right having a Kickstarter or that type of site because she felt a movie is not something to campaign for as there are many causes that she feels need contribution. She told us that she would rather the people who wanted to participate to receive something instead of just donating. Therefore, she has designed several collections of work, which will likely fit any budget or style. In saying that though, her storefront, and website will feature “VIP” packages for high donors-almost like you would find on the crowd funding sites, that way if major contributors did choose to donate a big amount, they will be purchasing a custom designed package from Dillon, herself. 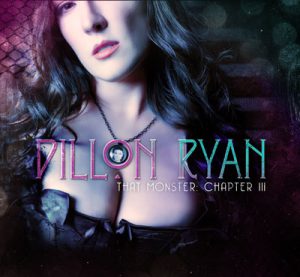 In the spirit of giving, she also has made it possible to donate to the most important causes to her heart, and therefore, the proceeds of certain items that are purchased will be automatically donated to 1 of 3 different charities, which she is passionate about. They are: Suicide Prevention/Anti-Bullying which is the focus of her song, “Dear Me”. Mental Illness for those she has been close to and watched suffer, and then for her late mom, she founded a charity called, “Geri’s Kids” in which she is donating several items to and the cause will be different local families. She decided how important this was when she found herself puzzled that at such a young age she was forced to not only be caregiver but breadwinner as well, and it was nearly impossible.

She didn’t understand why there was no help at all, and she as well as others often find themselves, without health insurance, neglecting their own bills, and possibly even losing their jobs- all while suffering through a parent having cancer, and the emotional and traumatic stress that brings. Her sister, was still in high school, and had lost at this time now both parents at 17 and yet, there was no foundation. This is where she wants to focus her mom’s legacy and anything that she can offer to help because she says that although she felt that one thing she is most proud of is how she took care of her mom, she said that she wonders if she could have done that much better if she hadn’t had to worry about keeping the heat on and keeping her job, while having so much time off needed.If you want to donate directly to any of these causes you may contact for information at:

If you want to donate directly to any of these causes you may contact for information at: Dillon@DillonRyan.com or Contact@Blackbulletproductions.com

If you would like to donate to Dillon’s Movie Project you can do so here:

You can shop at: Www.DillonRyanDesigns.com

You can also purchase her CD and songs at her website, store or on: