Swedish cult movie maker Jonas Wolcher is back for the forth time of music videos this year. 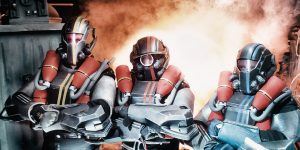 This time he brings back the genre “Space Opera”. The Swedish band Vogon Poetry got an eye for “Danger of Space” which is their upcoming single and first real music video.

Roger Tell the manager and songwriter explains. “We contributed with a couple of songs to Jonas Wolcher’s “Cannibal Fog” in 2014. When we begain to plan our latest album I got the idea of letting someone who loves the genre so much as Jonas does direct our video so I asked him. He didn’t hesitated for a minute and said yes”. 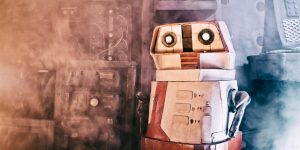 The video was shot 70 km outside north of Uppsala Sweden at Yellow Pig Picture Studios and the band played their own characters.

VARIOUS LOCATIONS
Some of the scenes were shot in a shower, at a camping and inside a barn. To get the proper force perspective larger scale models were used.

REAL PROPS
Propmaker and film maker Gustav Ljungdahl explains how the costumes were made: – I always use what I have at the moment. My costumes should be easy to use and easy to make. The costumes for Vogon Poetry were in different layers with lots of details on. and it took nearly three weeks to make. 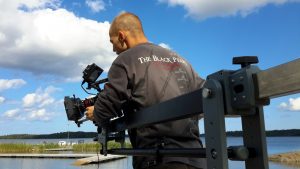 My ambition was to do it by the book. I’ve used every techinque available but no computer generated images because I wanted the video to look it was made 50 years ago. Our photographer David Eric Nilsson used some very old special projector lenses and camera lenses from the 70s to give the correct look. Jonas continues.
But the biggest challenge was to make Dr. Brain believable and I think John the singer nailed it pretty well.

ABOUT THE BAND
Vogon Poetry is stationed in Gothenburg, Sweden and consists of the three members: Roger Tell, Daniel Önnerby and John Andersson.

At this moment Vogon Poetry goes to Finland for a synthfestival (https://www.facebook.com/events/1666879293621205/?fref=ts)
During the concert they will play a clip from their upcoming video.
If you want to know more about Vogon Poetry (https://vogonpoetrymusic.bandcamp.com/)
or more about the video itself (http://dinopublishingjw.weebly.com/newsflesh). 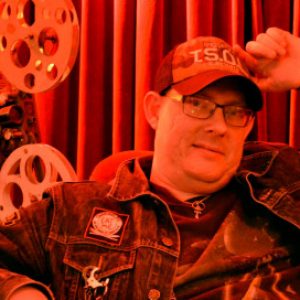 HERMIT: MONSTER KILLER has been in the works since 2002, when Paulakoski first began writing the script. “Years ago, I saw a short about an old hermit living alone with his dog,” the filmmaker explains. […]