Consistency is the easiest virtue to feel cynicism toward – it’s not flashy and it can be hard to get excited about it. Albums that shatter expectations often make headlines, and bands that constantly evolve their sound tend to get the most applause. Putting out a great EP or album, with song after great song, all with major style tweaks to one’s sound, while maintaining a steady, high level of creative quality is arguably more difficult and more impressive. “Venice” is a beautiful EP with amazing lyrics and musicality. It creates worlds and waves, digging deep and lasting long in the listener’s mind. Almost like an addiction, the songs contained within this collection will keep drawing one back to the harmony and melodies, long after the last note has ceased. The mind-blowing arrangements create intense sounds that make it hard to believe that this is only the second release from Australian musician, Brice Sedgwick, after his critically acclaimed debut album “Pacifico”.

It would have been easy for Brice Sedgwick to lose it all in this maelstrom of acclaim, and succumb to difficult second album syndrome. It would have been all too easy to have written some songs, used his well-trodden formula, added a sparse piano and a few more adlibs in the background, package it up and roll it out quickly to continue riding the wave. Thankfully, he hasn’t.

Not that he has lost any of the otherworldly magic present on “Pacifico”, on the contrary, I feel that “Venice” is even more transcendental than his previous work. How else would you describe the awe-inspiring titular track which opens the EP?  This goes right into our head and hearts when we remember drowning in an unwanted relationship that just won’t work, no matter what the other person brings to it.

Brice Sedgwick doesn’t seem to be moved by the pull of radios, labels or critics. He remains rooted in his own personal sound and in his will to stay grounded, the physical here and now. The authenticity breaths through his melody, lyrics and vocal approach, and this EP embodies that direct sound which reaches into your heart and soul, and connects.

“Symmetry” has an all-powerful rhythm and richly layered instrumentation which is a showcase for Brice’s emotional voice and powerful harmonies and chants. “Mondays Aren’t Blue In California” is a mid-tempo burning delight, with a sting in its tail. There is an under-the-surface energy which allows us to join in on the musical journey the song takes. 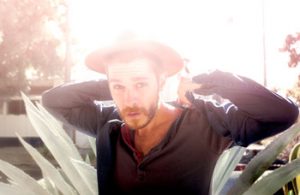 If there’s a common thread between the songs on “Venice”, besides the varying lyrical themes surrounding relationships, it’s that these songs hit you on an emotive level before anything else. There’s a distinctive sound, instrumentally and vocally, that sets them apart, and it tends to stay with you long after you’re done listening to it.

You’ll be hypnotized by the swaying rhythm of “Neighborhood Scenes”, and the effect of the sprawling harmonies with its multiple textures. It is, in my opinion, one of the EP’s strongest components. To listen to a Brice Sedgwick song is to be aware of the vastness of the sound itself. You do not get the sense that you’re cooped up in some small music venue.

No, it’s more like being outdoors, surrounded by a multi-textured landscape and an ocean of sound. Which is unusual really, considering the detailed intimacy of Brice’s narratives. More often than not, singer-songwriters have a style that sounds as if they’re communicating with one person at a time.

In Brice Sedgwick’s case, it’s as if he is singing to groups of people all at once. It’s like he is standing on a pedestal candidly narrating suburban tales and relationship intricacies to us all. The trick is being able to balance pop grandiosity with singer-songwriter intimacy, and Brice gets it just right on “Boys Don’t Cry”, as he does on the rest of the EP.

The melodies and harmonies on “Venice” are all strong, the instrumentation is wonderful, and the arrangements are very tasteful. Ultimately however, it’s the compelling songwriting and Brice Sedgwick’s striking performances that will leave you utterly breathless.