My name is Craig Moreau. I am 30 years old. I am a country american singer songwriter from New Hampshire

From a very young age I was always drawn to music. My mom says to this day I knew words to Garth Brooks-Shameless before I was talking in full sentences ha ha. I was always singing a imitating my favorite artists from a young age. My parents split when I was 8, and it left a void in me. As I grew older I started experimenting with substances to try and fill that void. It led me down a destructive path and a decade long run with a vicious drug and alcohol addiction. This eventually led me in and out of institutions, jails, and eventually into prison. It was then where I had the time to regroup myself and decide what I want out of life. I knew it wasn’t the life I had been living for so long. I decided to get back into the music, started writing more, playing more, and when I got out, I bought a guitar and started taking steps into recording my own songs.

Now I am proud to say I am a recovered alcoholic who helps other recover from alcoholism and addiction, and an independent country artist.

I hope the personal experiences that I write my songs from will have an impact on the listener, and maybe help them out in any way.

Tell us about your new single? And what’s the story behind it

Sounds Like Thunder is one of those songs that pulls you in from the very beginning. It’s got crunch guitars and a mean banjo riff right off the bat. I was walking out of my house back in 2013 and I could smell a storm coming in. I thought to myself “how cool is it that a whiff of rain before the storm can bring about so many memories of emotions” and then the light bulb went off and I wrote this song in about a half hour. It kinda just fell out of me. I wanted to incorporate the 5 senses and give emotions to them to really capture what it was I felt when I walked outside, and the chorus was born. What I love about this song is rain storms are usually perceived with a “doom and gloom” kind of view, even though they have always been extreme calming and relaxing for me personally, and this song shows that something beautiful can come from any situation

What makes your productions unique? And how would you describe it? (genres/sub-genres)?

Having the eclectic taste in music I have, along with the multi-genre musical influences that I do, definitely sets me apart from the pack.

If my music library was on shuffle you would hear Garth Brooks, Bon Jovi, Celine Dion, Bob Segar, George Jones, Disturbed, Tupac, Daughtry, Skid Row, Eminem and anything in between. I think the melting pot of influences and taste is what makes me unique.

Garth Brooks as always been my idol and biggest musical influence, but Keith Whitley, Bon Jovi, Billy Joel, they all influenced my music as well. I would love to collaborate with Garth Brooks.

I gotta say the Sister Christian music video I put out on my YouTube Channel. That was a blast to record and an honor to cover a Night Ranger classic. Also, the current project I am working on, my next album “Under the Covers”

Be a sponge. Take suggestions and never think there isn’t more to learn. Don’t be afraid to make mistakes, just use them as lessons.

“Stay true to yourself, and always keep it fun!”

You guys have had my back since day one, thank you for all you love and support. Stay tuned cuz we ain’t even close to finished!

What’s next for you? Any upcoming projects or tours?

I am currently in the middle of recording my first concept album titled “Under the Covers”. I cover songs from artists who have had the biggest impact on my music, and songs that hold near to my heart. It’s a 12 track compilation, from 12 different artists. My hopes are to showcase my versatility as a vocalist and also give people an insight to who I am. Set to be released in June 2020 so be on the lookout! 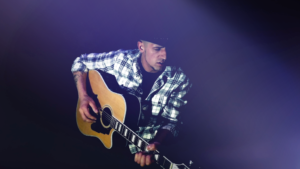 Great to have you on Pump it up Magazine. Please, introduce yourself?   I’m Mikey Hamptons from Mikey Hamptons & The Meows. Born in Brooklyn, NY I’ve been writing songs for a number of years now […]

Jenn McMillan, Michigan-born musician has been spreading her songwriting and musical talent across the great lakes state for years and is ready to inspire as many people as possible with her music from coast to […]