1.Tell us a little bit about the day-to-day life of a sound engineer

As far as myself is concerned, I try to be working on something musical everyday. I do tracking, mixing and mastering. In today’s music business you have to be multi faceted. My heart really lies in doing mastering these days but I still love the challenge of tracking and mixing. If I’m not involved in doing any production work I’m usually spending quality time with my daughter or hanging with close friends. (most of them are creative souls as well)
Music is Life

2. What kind of training do you have?

I took some Recording Arts classes at a recording studio in Philadelphia called Kajem Studios in the early 80’s. This led to me getting a gig there as an intern/2nd assistant. I learned on the job under some great engineers and producers around Philly. You worked hard and slowly but surely worked your way up the production ladder and built up your credits.

3. Do you feel the path you took is common in the industry?

It used to be that you interned and then if you showed a strong work ethic and the ability to learn quickly some of the more established engineers and producers would take you under their wings and bestow their knowledge down to you. Thus making you a great assistant.
Sadly this isn’t quite the same path that exists today. 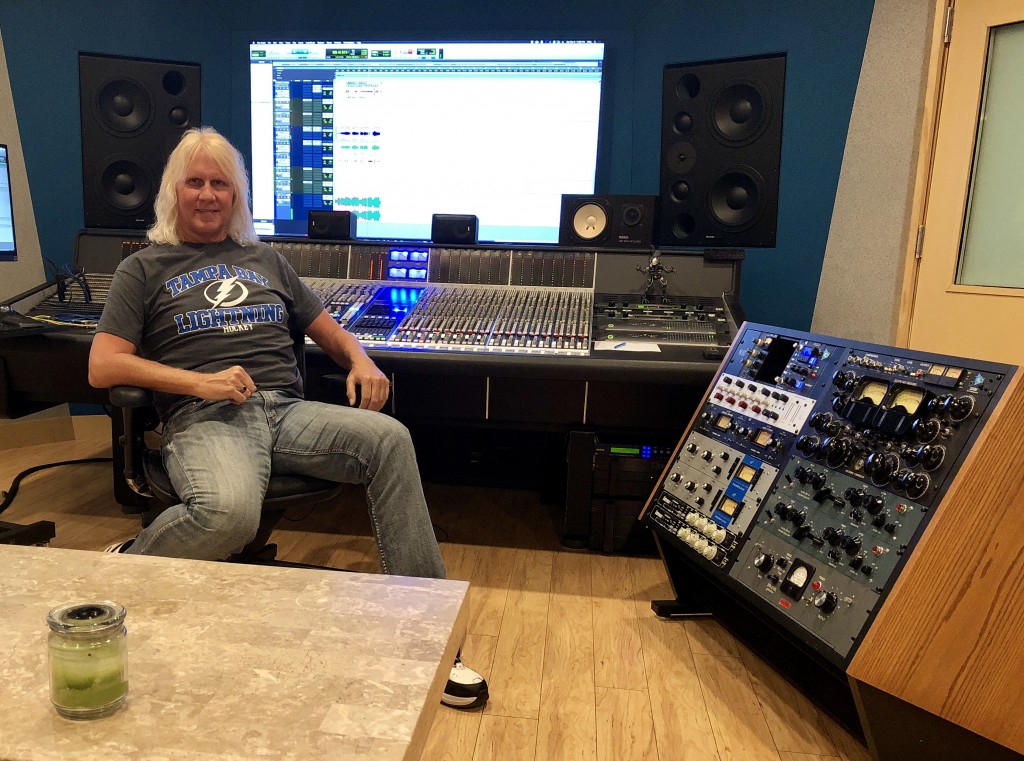 4. When did you know you wanted to become a sound engineer?

When I was exposed to albums by Jimi Hendrix, Led Zeppelin, Boston, Earth, Wind and Fire, Elton John,  and so many other great artists and bands in the 70’s. I became intrigued with how they made albums and what music production was all about. There was no internet so music production seemed mysterious and the only way to learn about the craft of record making you had to seek out recording magazines and read about it and then eventually try and land an internship at a big recording studio.

5. Who are some of the artists you’ve worked with?

-Rob Caggiano producing. Rob is also the lead guitarist for world re-nowned hard rock band Volbeat. That one was a blast to say the least. Jim brought in Brian Johnson vocalist from AC DC to guest on a few songs. Good times!!!

So many other talented artist’s over the 35 years I’ve been at this so see my web page for a more complete list but those are few than come to mind. I feel blessed to work with so many talented souls over the years. I never take it for granted.

6. How did you get your first SR gig?

I started interning at a studio in Philadelphia and once they trusted you they would allow you to track and mix local bands demos. That is how you cut your teeth in the beginning.

Social Media is a helpful way to find work. Instagram and Facebook allow you to reach a very large pool of potential clients. Having an active webpage is also obviously very needed in today’s digital economy. But by far the best form of advertising is word of mouth.
Doing great work and getting references by word of mouth is very important. I take pride in anything my name goes on. You must respect artist’s and producers talents and go the extra mile to make sure they are happy with your work. Nothing short of stellar is good enough for me! 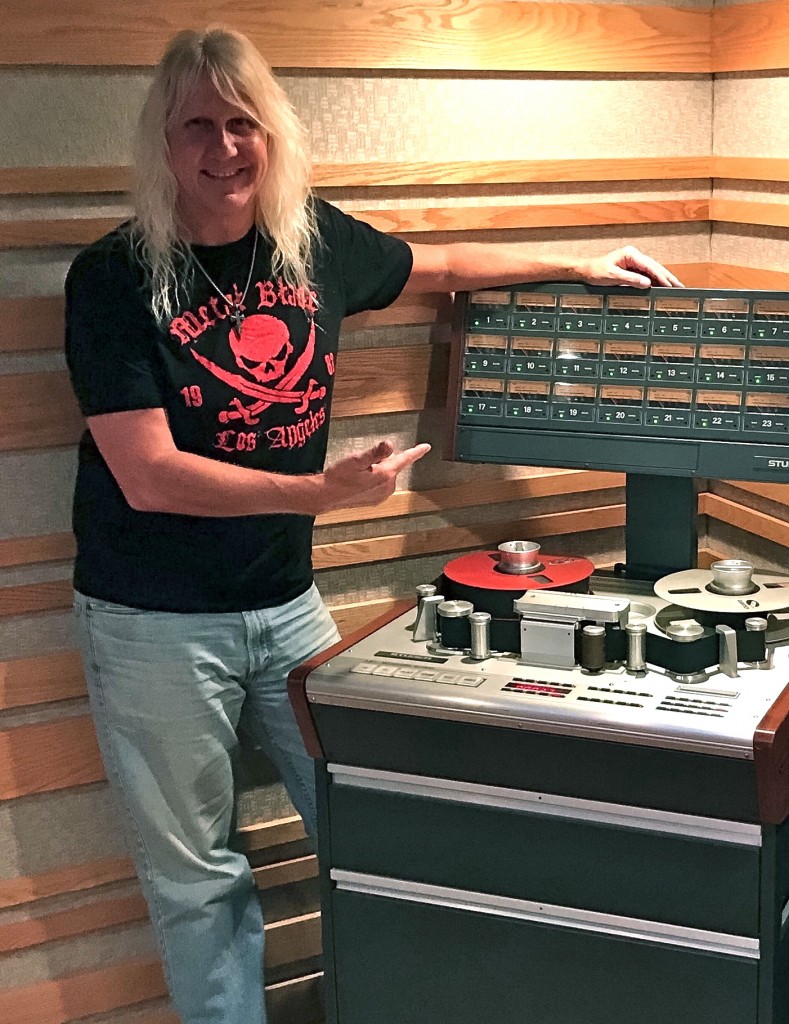 8. What separates a good sound engineer from a bad one?

9. Do you also do live Sound Engineering as well as Studio Recording?

I’m a studio cat only. I greatly appreciate the talent it takes to be a great live sound guy or gal but it’s not for me. But the people that can accel at it are amazing!

10.What is the toughest lesson you ever learned in the recording setting?

I was working very as an engineer to a very well know producer. We were running through getting vocal chain set up tweaking levels for the pre amps and compressors as the vocalist was running through the song. I heard the producer say “glad we are recording this as he has never sung it this good” I didn’t drop the tape machine into record. He screamed at me “The motto of a great engineer is always in record” “Always in record James”
So valuable lesson learned, no matter what, capture every performance in a recording session!!!

11. Do you decide on a suitable sound quickly, or do you tend to tweak tones obsessively?

That depends on the budget (laughs) I believe that nothing that sounds great is slapped together. I like to tweak and adjust till we find the magic tone. It’s important to work efficiently within the parameters of the clients budget. But some great producers I’ve worked with over the years always told me “never hit record until it sounds like a million bucks coming out of the studio monitors”
So in the end it’s a balancing act between working fast but getting great results. It’s all about making the client and producer happy!!

12. What is your favorite DAW to work with when recording.

I’m and hardcore Pro Tools user. Been using it since around 1989

But I also love to use Studer 2 inch tape machines when tracking and ½ inch tape machines when mastering. I work out of a beautiful facility called Clear Tracks Studio in the Tampa Bay area of Florida. We have a system called CLASP (Closed Loop Analog Signal Processor) It takes our Studer a827 2 inch tape machine and locks up to our Pro Tools HDX rig. You track through the tape machine and it records to tape then feeds into Pro Tools with no latency. So you are getting the magical sound of tape with the ability to tweak and edit in Pro Tools without any tape costs. It’s an ingenious system that combines the best of both recording mediums.

11. What projects are you working on now?

I’m currently working with Grammy nominated producer Jayar Mack recording a full length  comeback album for the legendary 60’s girl group “The Goodies” Jayar Mack also has several other  very exciting albums in the pipeline. Jayar is also releasing a greatest hits album full of songs from the first half of his career.

Jayar Mack is also producing a new EP for Reverend Barry and The Funk. Hailing from Sarasota, Florida These guys bring a old school funk and party vibe to their live shows. Lots of talent in the band which will be showcased on the new EP.

Mastering for Motown Legend Michael B. Sutton and his new label “The Sound Of LA” Michael has a great stable of talented, up and coming artists. I’m thrilled to help this label gain major success.

I just wrapped up mixing the new album for Virginia based reggae rockers “The Feathered Fish”. Very cool hi energy band full of vibe and fun! The album is called “Sea and Sky”

Mastered the new single from “Aneessa” one of the new artists on Michael B. Sutton’s The Sound Of LA Label. Sexy, sultry smooth jazz artist. I look for her to break through and become a well known artist in the Pop/R&B, Smooth Jazz scene.

Mastered a new single from Sony Music/Sony Latin Recording artists Ha-Ash. “ESO NO VA A SUCEDER” (“That Won’t Happen”) Mixed by the talented Daniels M Justin. These sisters are multi talented and are ever popular with a worldwide audience.

Mastered “Gloria West and The Gents” new album for talented producer David Pezza. “Dem Keys” is swing jazz at its finest.
Talented gal with lots of soulful vibe!!Mastered melodic hard rockers “Siravo” new album. “The Restless and the Mad” Philly/New Jersey based was produced and mixed by the talented Jason Ruch at 0x1 Sound Studios in New Jersey. Look for big things from these guys in 2019

Mastered songs by Olivia Romano. She is a stellar pop singer/songwriter from the St. Pete area here in Florida.
Beautiful voice with catchy hooks!

Tracked and mixed an EP by the Tampa based hard rock band Quasi Mojo. Melodic vocals with crunchy riffs.

I also wanted to give a shout out to all the creative people over at Clear Tracks Studios in the Tampa Bay area. It’s my home base for all my production work. Great facility with a stellar team!

FOR IMMEDIATE RELEASE Chicago, IL – Get ready to be blown away by George ‘G-Spot’ Jackson’s latest masterpiece, “Ti Amo Santana”. This track is set to shake up the House Music scene and solidifies George’s […]

Multiple award winning singer, songwriter, actor – Emmerson Bockarie is one of Sierra Leone’s most globally recognized and adored music superstars. Popularly known as Emmerson, his skillful writing, mastery of metaphors, and use of Krio, […]