The 60s, 70s, and 80s are usually described as the height of cool fashion, especially the 60s and 70s. If the style looked otherwise to you, 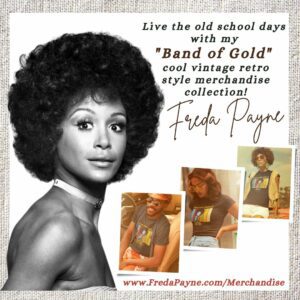 that’s only an indication of your difference in taste.

One of the true icons of fashion since the 60s and 70s is the American Soul/R&B singer, actress, and former TV host Freda Payne. Alongside her chart-topping music projects, Freda was widely known for her alluring style, displayed in each of her music videos and also featured on magazine front pages from the past. Both in fashion and music, Freda has been one of the most well-known international figures that have influenced fashion changes in the eyes of the new generation.

With so much experience from her life’s journey and career, the erstwhile Billboard artist recently came out to announce her new and crisp merchandise collection inspired by her 1970 hit single, “Band of Gold”. Released with the theme “Live the old school days with my Band of Gold,”  collection is a revamp of the old Freda Payne fashion sense but wrapped in the new school taste. This is a reasonable consolation for everyone that was not yet born to live through the 60s and 70s. This cool vintage retro style collection is specially made for you.

Freda Payne’s bombastic pieces have been categorized in form of; Apparel, Homeware, Accessories and Drinkware. Items such as; Premium Tees, Women’s comfort Tees, Classic pullover Hoodies, Crop Tops, Yoga Mats, leggings,Bucket Hats, Notebooks, Mugs, Stickers, Backpacks, Slides, Indoor Pillows, and Beach towels are among the wide selection that you can access from her collection. All the items have been branded with Freda’s “Band of Gold” and marked with the year 1970 – the same year her song became an instant pop smash that sold an estimated two million in global sales. This outstanding collection of wears and other items is readily available on her online Freda Payne Store (www.fredpayne.com/merchandise) where you can purchase everything you need for all seasons.

As of Wednesday (27th July 2022), the Freda Payne online store will officially launch with a 10% off discount on all items you purchase. Discount code for each purchase: bandofgold.

Freda Payne is an American Soul/R&B singer, actress, best known for her career in

music during the mid–1960s through the mid–1980s. Her most notable record is her 1970 hit single, “Band of Gold.” Freda Payne was also the host of a TV talk show dubbed “Today’s Black Woman,” and also found work acting in different musicals and films throughout the 1980s.

Her remarkable talent and contribution to the entertainment industry is indeed a gem for many other artists today.

Connect with Freda Payne through her official Website; http://www.fredapayne.com/ and on all her social media platforms under @IAMFREDAPAYNE.

See What They Wore to the ‘Daily Front Row’ Fashion Awards

Traditional awards season may have come and gone, but on Sunday evening, those who are responsible for making the stars look their best during those many red carpet appearances got a bit of appreciation themselves […]

Celebs like Heidi Klum, SZA, and Amandla Stenberg did not come to play with their super skin-baring outfits on the 2019 Oscars and Elton John Oscars Viewing Party red carpet. Scroll on to take a […]

How to Make Better Fashion Choices

Image Pexels CC0 License Are you hoping to switch up your style and improve your look? If so, you may be wondering where to even begin and concerned about the amount of money it will […]