On now through September 1, 2019 the Victoria & Albert museum in London, is paying tribute to the most famous name in fashion, Christian Dior with a grandiose exhibition. Well conceived, meticulously organized and incredibly executed, this exhibition is an artistic voyage of pure visual delight and discovery. This show first debuted in Paris two years ago at the Musee des Arts Decoratifs in Paris amidst immense fanfare. Some 200 rare haute couture garments surrounded by 500 other items including handbags, shoes, bags, perfume bottles, photographs, paintings, illustrations along with documents, letters, sketches, print ads, and fashion show video clips. For the London show, the Brits expanded on that show by adding an extra section focusing on Christian Dior’s fascination with London’s Saville Row as well as Blenheim Palace in 1954. 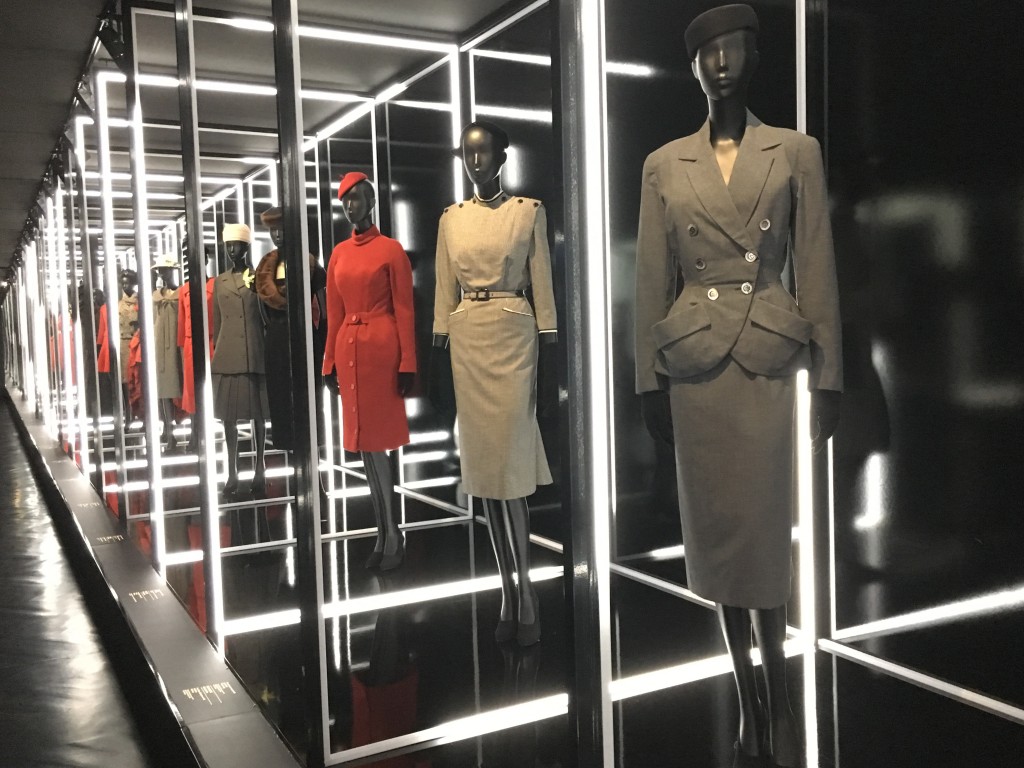 Though Mr. Dior himself was only present for the first 10 years of his namesake fashion house, his work as couturier and businessmen as well as contributions made by the designers who succeeded him paint a picture of the enduring legacy and evolution of France’s number one temple of style. The exhibition begins with an introduction to the man behind the name. We learned Christian Dior came from an aristocratic family and was inspired by the wardrobe of his fashionably dressed mother. His professional career saw him first, working in an art gallery before turning to the world of style. Over the years, there were key elements apparent in each collection. Inspiration was drawn from the city of Paris, the Gardens of his native town Grandville, Dior’s fascination for the 18th century French aristocracy, a love of nature, the world of fine art and…the elegance and lavishness of Versailles. Paintings, period furniture and objet d’art are used as a setting to convey the couturier’s aesthetics, culture and inspiration. As to be expected, there are plenty of full size garments—from the New Look suit to the embroidered Junon gown with its sequined petals– each one more beautiful than the other. But to my surprise and delight, the exhibition also includes an extensive part of “Le Peit Theatre de Dior”—one-third scale versions of many of Dior’s dresses and suits. 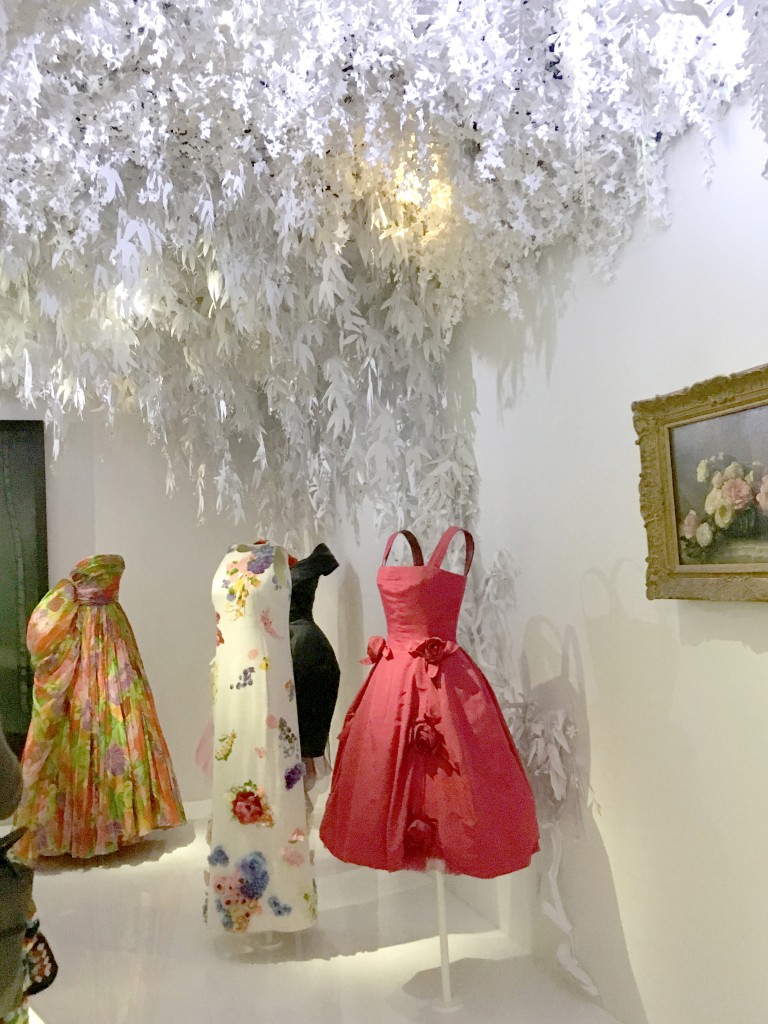 It all starts here…The New Look. New Look Spring-Summer collection in 1947, Christian Dior took the feminine shape in a totally new direction, relegating the masculine silhouette of the war years to the past. His dresses expressed a modern femininity, incarnated by his flower-woman and producing a shape characterized by flowing curves. Side by side, one garment for every year Christian Dior has been in business. In a glimpse we can see how silhouettes have evolved from the end of WWII thru today’s styles.

The “Dior Garden,” a lavish theme of floral dresses, gowns with intricate embroidery or even hand cut petals are surrounded by laser cut flowers that drop from the ceilings and spring from the floor. For the theme, Versailles, the nave of the museum was bathed in lights, providing the illusion of attending a most magnificent ball within interiors of the Chateau. Including Mr. Dior’s leadership, the legacy of the house has been in the hands of seven couturiers: Yves Saint Laurent, Marc Bohan, Gianfranco Ferre, John Galliano, Raf Simons and Maria Grazia Tchuri (the current designer). This section takes a peak at each couturier’s contributions.

But before a dress becomes a dress, it is a toile. “The Atelier” provides an unusual glimpse of the work that goes on in the couture house’s atelier. These white cotton dresses are draped embryos, which after much adjustment, consultation and decisions on color, fabric and embellishments, ultimately blooms into the finished garment we see fluttering down the catwalk. That means, cotton toiles are created prior to the final garments, all of the finishing is perfect right down to the most minute detail and even the embroidery with its miniscule beads and stitches is applied employng the same 18th century techniques of the regular ateliers.

The exhibition ends in the lavish setting, “Versailles.” It is the perfect setting for the sumptuous ball gowns, some of which have been worn by famous women (and faithful clients) including Princess Grace of Monaco, Princess Diana, Elizabeth Tailor, Charlize Theron and Jennifer Lawrence. 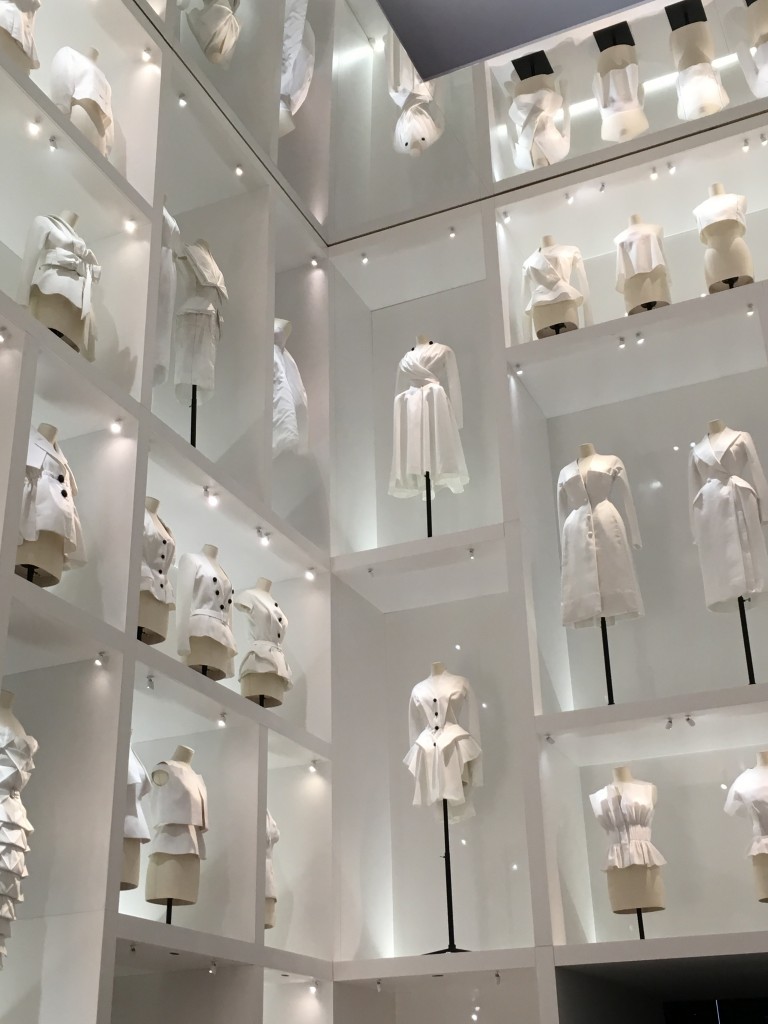 See What They Wore to the ‘Daily Front Row’ Fashion Awards

Traditional awards season may have come and gone, but on Sunday evening, those who are responsible for making the stars look their best during those many red carpet appearances got a bit of appreciation themselves […]

Ready or Not, the Return of the Hobo Bag Is Nigh

Whatever happened to all the hobo bags? Are they lost forever among the party-gal pages of noughties Vogue? Stuck in a box in the back of Sienna Miller’s closet, a relic of her bohemian-Brit phase […]