1. A Single Man: Everything Tom Ford does is the epitome of chic, and his directorial debut is no exception. 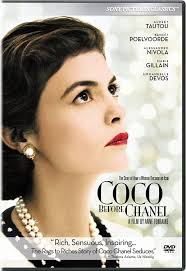 2. Funny Face: When Quality magazine seeks an intellectual look, it’s off to Greenwich Village where bookshop clerk Audrey Hepburn fits the bill. And the rest is history.

3. The Royal Tenenbaums: If Gwyneth Paltrow’s fur coat doesn’t get you, Ben Stiller’s tracksuit will.

4. Black Swan: You know you’re in for some serious drama when you have Rodarte behind the seams of your prima ballerina’s costumes.

5. Heathers: Those ruffles, those shoulder pads, those blazers: to die for.

6. Coco Before Chanel: The chicest period piece ever tracks the story of Gabrielle, the humble seamstress that launched thousands of tweed jackets.

7. Breakfast at Tiffany’s: Because what girl hasn’t channeled her inner Audrey Hepburn with an LBD and pearls on Halloween?

8. The Craft: This high school coven still casts a spell over us with its ’90s goth gear.

10. Clueless: From this moment on, we knew that when we had to look our most capable, we’d depend on a white collarless shirt from Fred Segal.

11. Bonnie and Clyde: Being bad’s never looked so good — nor worn better hats!

12. Marie Antoinette: Sofia Coppola let us eat cake with confectionery costumes and decadent sets, all to the tune of $40 million.

13. Blue Jasmine: In quite possibly 2013’s most stylish film, Cate Blanchett called in the big guns with Carolina Herrera gowns, Hermès accessories, and Chanel as far as the eye could see.

Image Courtesy of Pixabay Fashion is often used as a way to make a statement. Modern fashion can be viewed more as art than practicality. The designer and wearer’s personal beliefs can come across as […]

Silk pajamas are often thought of as a luxury, that individuals who are highly sophisticated tend to wear. The reason why this stereotype exists is that only the rich could afford such items back when […]

Celebs like Heidi Klum, SZA, and Amandla Stenberg did not come to play with their super skin-baring outfits on the 2019 Oscars and Elton John Oscars Viewing Party red carpet. Scroll on to take a […]