Mid-July of 1979: Disco music was officially pronounced dead. Following the genres’ death, a large portion of so-called party-peoples were left stranded without an outlet to express themselves through. Luckily for them (and for reasons obvious to us, now), there was little downtime between shifting musical movements for these party-peoples. At the turn of the decade bloomed an inaugural and prominent “Rave Era” in the world of the underground of the United Kingdom.

What started off as a small world for the youth to express themselves in, soon blossomed into a full-blown (sometimes drug-induced) subculture. Not only did this allow the Disco junkies a fresh outlet, but this also merged them with a punk subculture that was still cool in the 80’s. The combination of these two subculture mentalities spawned a collective counterculture movement which is now recognized as the birth of future rave fashions.

Being held in large abandoned warehouses, raves created a perfect environment for a Disco+Punk melting pot. The result? A hodgepodge of multicolored hair, fish nets, and tight pants. These relatively small communal gatherings formulated a temporary on-the-spot industrialized-bohemian society, lasting only until sunrise. Following its conclusion, people would return to their day jobs as if going to that Neon-Narnia was no big deal.

Around this time, DJ’s began traveling nationally and internationally, bringing this new style of music to the larger and more post-industrial cities of the United States and beyond. This lead to similar events held in cities like New York, Chicago and Detroit – the birthplaces of modern house and techno.

As the rave scene continued to grow across the globe, the fashions had to adapt to stay cool and hip – to stay in line with modern perceptions and ways of life. This lead to the 90’s era of rave fashion; which as anyone might guess…was somewhere along the lines of “Boy Meets World” meets “Fear and Loathing in Las Vegas“.

The new 90’s rave style led to a number of  questionable socially-acceptable exclamations, such as the scandalous exposure of bellies and other such underground and mainstream societal-perceived outlandish atrocities. But the rave scene at this time was marked by one standout element that is impossible to ignore… 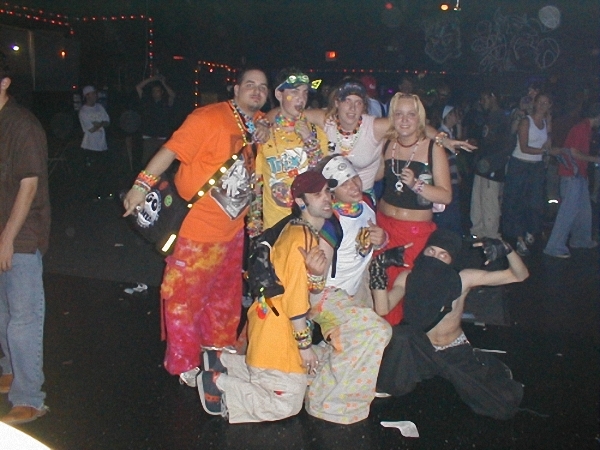 Any self-proclaimed raver who was not wearing these baggy FUBU-frontrunners wasn’t much of a raver at all. This is where we begin to fully understand and visually perceive how much our culture has evolved between the roarin’ 90’s and today’s modern culture. Today, everybody’s inner-sixteen-year-old self-appointed/inspired GO-GO dancer would think these pants absurd – as we shake dat in more skin than cloth outfits. But if you raved in the 90’s...you wore these pants. Furthermore, the rationale behind them makes more sense than booty shorts! (At the time…)

The argument being simply: comfort. Back in the 90’s, dancing was much more about dancing instead of fist-pumping (believe it or not). This is where these pants truly came in handy and became an extension of the event. Though I have never worn these practical fashion statements, I am told they look super cool when you’re dancing as they twirl and spin out from you creating trippy  visual illusions. Also, clearly being extremely loose fitting, they were comfortable against your skin as you danced. Plus, who needs a rave bag when you have all that pocket space in your massive pants?

One more iconic fashion element that is a staple of today’s events, though in a much sluttier manner now, is the expression of the inner child. Being part of a society that valued self-expression in and any all of its forms ultimately led to a desire to reconnect with your inner child. This eventually manifested in ravers in costumes and attire of characters from Disney movies and childhood games, complete with Tu-Tu’s and fairy wings and anything you could imagine, including the beginning of the kandi culture, which can be seen in the O.G. raver pics above. Pretty cool, huh?

As the warehouse rave scene continued to blossom, they eventually (and quickly) got too crowded for the closed-in environments that they normally took place in. This ultimately led to the banning of underground raves in the UK. This forced the scene to be confined exclusively to nightclubs in order to continue to exist. As you can imagine, the packed nightclubs are the reason those ultra-cool baggy pants started to phase out, as our scene is one of evolution. With the less-space-to-dance venues, it caused a return to the tight and flashy disco pants, because they were more practical than those hyper-baggy bellbottoms.

Overall, the late 90’s and its’ packed club environments led to the less-is-more mentality that is still highly popular today. Since the nightclub scene was so popular in the Disco era, a lot of fashions took pages from the Disco book and modernized them in typical counterculture fashion. This sparked the explosion and resurgence of overly flashy attire and Go-Go dancer inspired clothing.

Additionally to accompany this, technology played a factor in the evolution of the scene. Not like iPod kind of technology, but something way way cooler: UV technology! The late 90’s saw a surge of UV and black-light sensitive clothing that soon became the current stereotype of rave fashion. Anything from neon clothes to glowsticks to paint and everything in between. Along with other such neon trinkets came the proliferation of the Kandi Kids, along with other accessories and trade-able attire.

This is the time when rave culture truly began to take off in the United States. Following the 9/11 attacks, many of America’s youth longed for an outlet of expression and venting, which is exactly what was discovered within the culture of the rave. Due to the increased demand for large scale raves and events, companies like Insomniac began hosting events such as EDC, which have only continued to blow up even more and generate staggeringly larger interested parties(ers) today.

These multi-day festivals merged indie music culture with electronic music culture, which in turn saw a return to the bohemian lifestyle outlook and perception of the 60’s and 70’s. This free-spirit mentality was an escape from reality, if even for only a few days. This spurred an increase in face painting (well, body painting in general), fringe wear, feathers, headdresses, flowers and more.

This era is marked by the electric music scene becoming more of a “scene”.

Maybe it’s due to the fact that we live in a progressive society, maybe it’s because people just don’t give a rats butt anymore, and yet maybe it’s a “look at me! look at me!” mentality, but the current trends we see in modern day events is absolutely an “anything goes” mentality. This includes fashions such as no fashion (or, typical fashion); wearing solely body paint, bikinis, pasties, and more (or less, I guess). 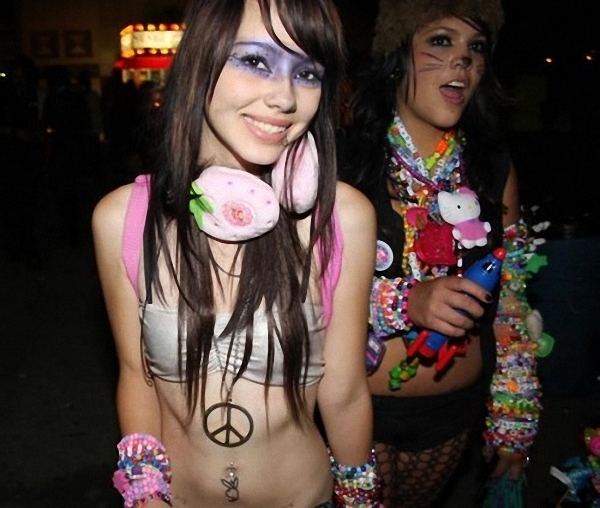 But I digress. Just as the music changes, so does everything else. Maybe when I’m old and ancient at the tender age of 30 (or so) I will look back and say “Geez, back in my day girls at least wore paint to these things.” But who knows. Looking at the shifting styles of these subcultures over time gives us vast insights into how the mainstream culture was behaving at the time, and how they viewed their lives. Anything goes: from Pokemon inspired Onesies, to tassel-wearing would-be princesses who “is Ariel….Duh.” As trends keep trekking on, so will I in my khaki shorts and beat up Converses. The malleability of trends is just as fascinating as the music itself, and love it or hate it: it is part of the world we all have come to love. 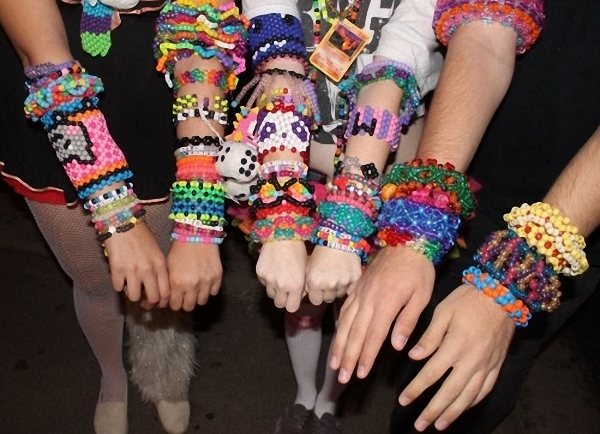 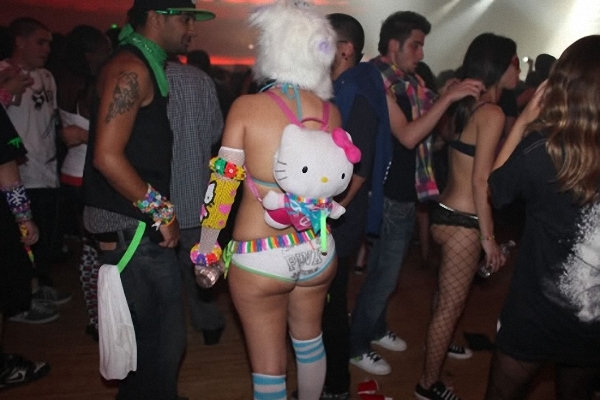