“Just To Be With You” by Smooth Jazz singer ANEESSA is a perfect love story told through soothing lyrics which gave her song momentum as many jazz lovers fell in love with its message!

The year 2020 gave us some smooth jazz tracks that left everyone believing in the new rising era of jazz music. Featuring as no. 18 on Soul Cafe Radio’s New year’s countdown for the year 2020 was the popular “Just to Be with You” by sensational artist ANEESSA from “The Sound of LA” music label.

“Just to Be with You” was initially released as a smooth jazz up-tempo joint & a great love song that Aneessa wrote to tell the story about her long-distance relationship, which bloomed while she was still residing in France and later ended up with her eventually traveling between miles to visit her love and never returning home again.

A perfect love story told through soothing lyrics gave her song momentum as many jazz lovers fell in love with its message, and it attracted over 27K streams on her YouTube channel.  https://www.youtube.com/c/AneessaMusic

On 7th January 2022, the gifted Aneessa, originally from France, a place where love rules, is set to release the Radio Edit of her past release, “Just to Be with You,” on all her digital platforms. The new edit is a modification typically intended to make the song more special for your radio experience, specially made for your ultimate radio pleasure. Whereas radio edits are known for having a few parts of the original song edited, Aneessa’s “Just to Be with You (Radio Edit)” is exceptional in a way that it has kept to its original impressive sound but only condensed into a much better deep sound with a firm grip on the music theory. Her new edit earns a few extra points for its creativity in style and being able to awaken all the love feelings that are professed in the lyrics of the song.

Aneessa · Just To Be With You Radio Edit

“Just to Be with You (Radio Edit)” is a production by veteran Motown producer Michael B. Sutton, the husband to artist Aneessa. Residing together in LA, Michael B. Sutton,  has been a strong force in Aneessa’s music career and the music industry as a whole. His tremendous production and songwriting skills have resulted in countless songs for many renowned artists, including Stevie Wonder, Thelma Houston, and Smokey Robinson. Michael B. Sutton, rose through the ranks as one of the best producers and music stewards to many artists by his behind-the-scenes efforts to guide many in the industry. He has written many theme songs and even branched into movies back in the late 90s. The prodigy made all the outstanding production work of Aneessa’s soon-to-be radio edit release with a smooth blend of different instruments fused to create the perfect smooth jazz track that will make your ears tingle.

To keep in touch with artist Aneessa’s new “Just to Be with You (Radio Edit)” and everything happening around her already released music, including her upcoming projects, check out her Website: http://www.aneessa.com or follow her on all social and media streaming platforms using the links below; 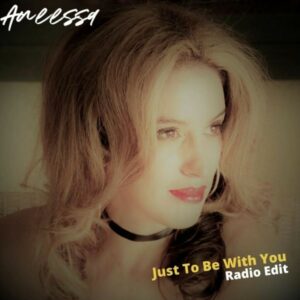